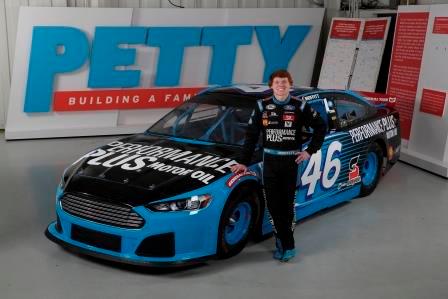 Richard Petty Motorsports (RPM) development driver
Thad Moffitt will make his fourth ARCA Racing Series start this weekend at the legendary Fairgrounds Speedway in Nashville, Tennesee. Moffitt, 17, comes into the 200-lap race more prepared than ever in his young career. He competed in three ARCA races in 2017, progressively getting better and finishing 11th at the tough short track in Indianapolis in his last start.

“We were one lap away from a Top-10 in Indianapolis,” said Moffitt about his last ARCA start. “We had a great race, but I think I had more confidence after racing both Nashville and Toledo in the ARCA Racing Series. I just learned a lot last year and feel that I can use that knowledge this weekend coming back to the Fairgrounds Speedway.”

In preparation for Saturday night’s race, Moffitt and his Empire Racing team tested last Friday at the track. Moffitt was pleased leaving the track.

“Yeah, as a team, we really learned a lot,” continued Moffitt. “We need to find a little more speed for this weekend, but we have a really solid Performance Plus car. This track is fast, and tire wear is important. I love racing on the General Tire racing tires we have. We just need to be smart, save our tires and be there at the end.”

Last year, Moffitt made his ARCA Racing Series debut in this race. He qualified and finished 16th after racing inside the Top-15 throughout the night. The team returns Saturday with primary sponsor Performance Plus Motor Oil on the hood and sides of the No. 46 and associate sponsors Transportation Impact and Hostetler Ranch.

Moffitt, the 2016 Southeast Limited Late Model Champion from Trinity, North Carolina, is the son of Brian and Rebecca Petty-Moffitt. He started racing a go-kart and a quarter midget before moving to a Limited Late Model and now a Late Model on the ARCA Racing Series. A high school student, Moffitt grew up going to the track with his grandfather (“The King” Richard Petty) and also watching his uncle, Kyle Petty, race.