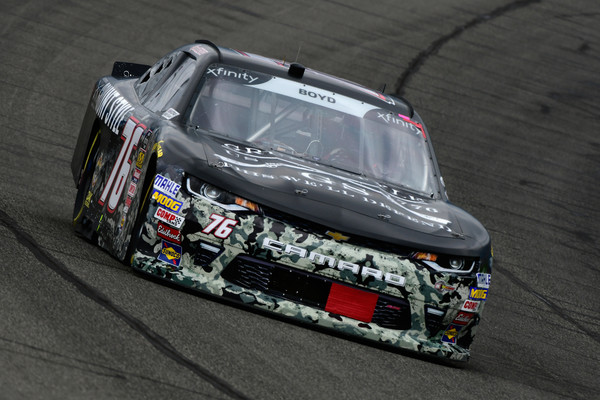 SS Greenlight Racing will once again bring chassis 704 to the track this weekend. This car previously ran Atlanta, Las Vegas, and California.

News and notes:  In a season where visiting tracks for the first-time has become normal, Boyd will return to Texas Motor Speedway for his second race at the 1.5 mile tri-oval. “I’m really excited to get back out to Texas,” says Boyd. “This year has been all about learning new tracks, so it will be nice to go back to a place where I’ve been before. Texas is just fun. I love the people, the atmosphere, and of course the racing. Hopefully we can have a good run and have some fun.” Complete Customs out of McKinney, TX joined the team as an associate sponsor for this weekend.

Special Passenger:  Boyd’s Grunt Style Camaro will bear the name of Staff Sergeant Eric Duckworth, on the quarter panels. SSG Duckworth made the ultimate sacrifice for our country on October 10, 2007. He died of wounds he suffered from when an improvised bomb exploded near his vehicle, which was leading a convoy. Duckworth’s brother, Andrew, his sister in law, childhood friend, Amy, and his father, Michael Duckworth, with the help of the Tragedy Assistance Program for Survivors (TAPS) will be in attendance this weekend. “I learned that Eric was a die hard NASCAR fan. He and his brother would constantly argue over who would win the race. I’m really thankful and honored to run his name on my car this weekend. I hope we can make him proud,” Boyd said.

TV/Radio:  The My Bariatric Solutions 300 from Texas Motor Speedway can be seen live on Saturday, April 7th on FOX. Race coverage will begin at 3:00 p.m. EST, and the event can also be heard live on PRN Radio as well as SiriusXM Radio, channel 90.

About SS Green Light Racing:  As one of the most tenured teams in all of NASCAR, SS Green Light has been a developmental hub for drivers looking to climb the ranks.  Led by Co-Owner, Bobby Dotter, the team has fielded entries in either the NASCAR Camping World Truck Series or the Xfinity Series competition since 2001.  Coming off a successful 2017 Xfinity campaign, SS Green Light looks to build further momentum with their two-car program.