Ford Going For Fifth Win in Seven Races To Start 2018 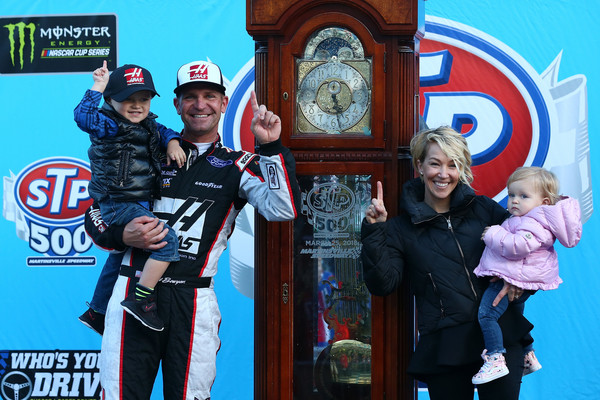 After a week off for the Easter Holiday, the Monster Energy NASCAR Cup and NASCAR XFINITY Series resume action this Saturday and Sunday at Texas Motor Speedway.  Ford drivers will be looking to continue a MENCS streak that has seen the manufacturer win four of the first six races in 2018.  Here’s a look at how the Blue Oval has done at TMS through the years.

When Clint Bowyer took the checkered flag at Martinsville Speedway, it not only marked his first win of the 2018 season but continued a Ford hot streak that has seen the manufacturer win four of the first six events.  Kevin Harvick’s three consecutive victories at Atlanta, Las Vegas and Phoenix got it started and Bowyer kept it going.  This marks the best start to a season for Ford since 1997 when Rusty Wallace (Richmond), Dale Jarrett (Atlanta and Darlington) and Jeff Burton (Texas) combined to win four of the first six races.

FORD IN THE MONSTER ENERGY NASCAR CUP SERIES AT TMS

FORD IN THE NASCAR XFINITY SERIES AT TMS

·         Jack Roush has eight series wins at TMS, which is second among car owners.

The last time NASCAR came to Texas Motor Speedway it saw Kevin Harvick pass Martin Truex Jr. with 10 laps remaining to win and advance to the Championship Four.  The Playoff race was Harvick’s first Cup victory at the speedway in 30 starts and his second since he and Stewart-Haas Racing joined Ford at the start of 2017.

Joey Logano’s first Cup win at TMS came in 2014 in a race that was delayed until Monday because of rain.  Logano dominated much of the second half, but a caution with two laps to go forced a green-white-checker finish.  He started third on the restart after the leaders stopped on pit road, and was able to get past Jeff Gordon on the final lap to claim victory.  Logano led 108 of the final 116 laps to claim the first of five wins that season.

A couple of firsts happened on April 6, 1997 as Texas Motor Speedway hosted its inaugural Monster Energy NASCAR Cup Series event and Jeff Burton took his first checkered flag.  Burton, led by crew chief Buddy Parrott, passed Todd Bodine with 58 laps remaining and beat fellow Ford driver Dale Jarrett to the finish line by four seconds.  The race was slowed by 10 cautions, which included a multi-car accident in first turn of the first lap.  Burton went on to win 21 career series races with 17 of those coming in a Thunderbird or Taurus.

Elliott Sadler passed Jeff Gordon with 27 laps remaining and then held off Kasey Kahne in the closing laps to win the Samsung/Radio Shack 500 on April 4, 2004.  Sadler, in his second season with Robert Yates Racing, hugged the inside lane over the final three laps as Kahne worked the outside.  When the two cars came off turn four for the final time, Sadler had a lapped car in front of him and that allowed Kahne to make one last charge.  Despite gaining crucial ground through the tri-oval, Kahne came up half-a-car length short as Sadler crossed the line first to gain his second of three career series wins.