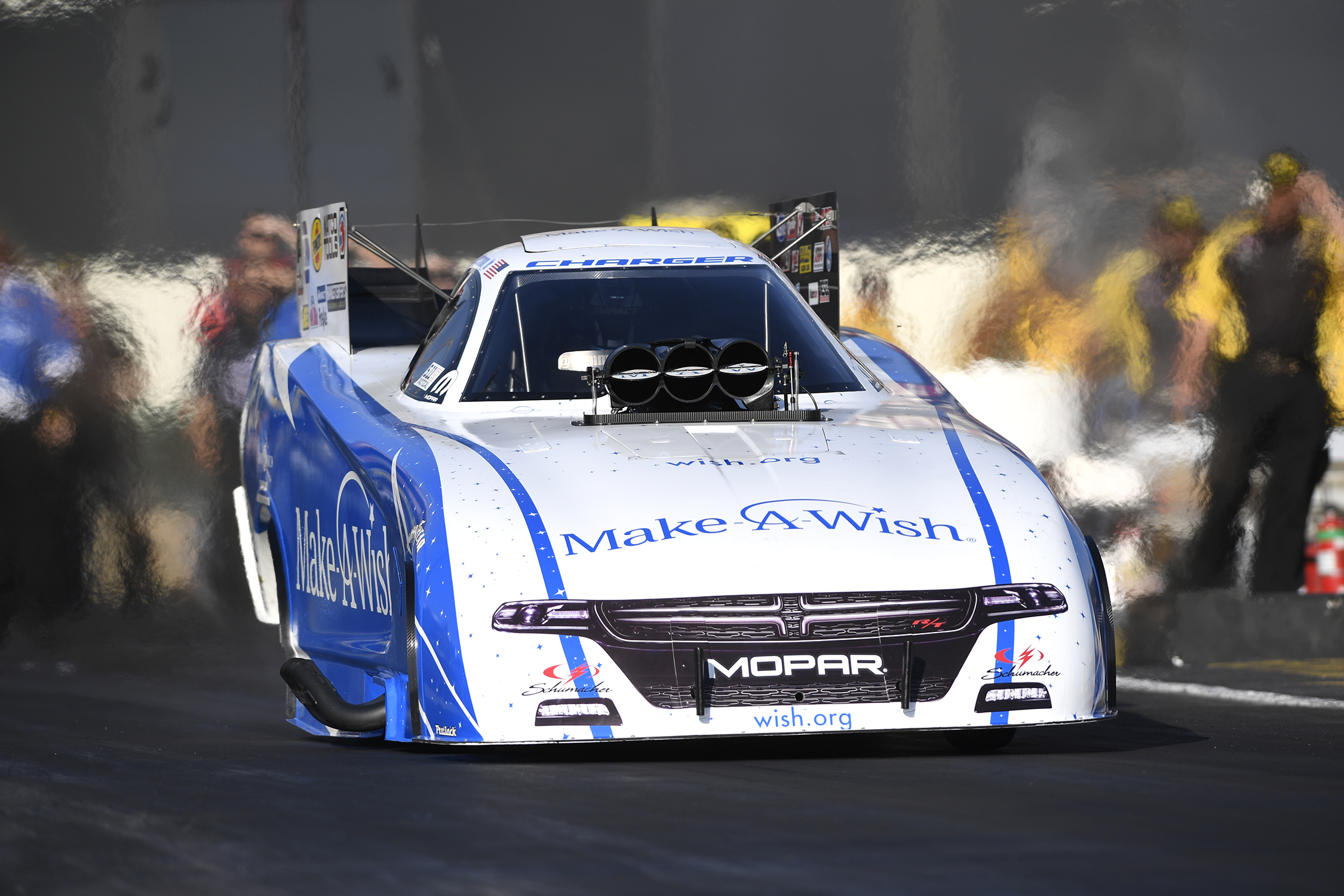 Already a fan of four-wide racing and running at The Strip at Las Vegas Motor Speedway, Funny Car’s Tommy Johnson Jr. is excited to see what that means for him when those aspects are combined for the first time at the upcoming 19th annual DENSO Spark Plugs NHRA Four-Wide Nationals, April 6-8 in Las Vegas.
It is the debut of NHRA Mello Yello Drag Racing Series four-wide racing, one of the biggest spectacles in motorsports, on the West Coast, and Johnson, the defending winner of the Las Vegas spring race, is one of many who can’t wait for the highly-anticipated race. Add in five career final round appearances at The Strip at Las Vegas Motor Speedway and Johnson believes something special could take place in his 10,000-horsepower Make-A-Wish Dodge Charger R/T Funny Car.
“It’s neat to be part of a first event like this and it’s going to be really cool,” Johnson said. “This will be a unique one. I’ve heard from a lot of fans on the West Coast at the first two races who are excited to see four-wide racing for the first time. It really opens everybody’s eyes when they see it. But there’s tracks on tour that just seem to fit you and Vegas is that track. It’s a fun race, fun town and a great facility.”
Antron Brown (Top Fuel), Johnson (Funny Car) and Tanner Gray (Pro Stock) were last year’s winners of the event that will be televised on FOX Sports 1, including finals coverage starting at 6 p.m. (ET) on Sunday, April 8. It is the fourth of 24 races during the 2018 NHRA season, providing fans out West the chance to see four 10,000-horsepower nitro machines go down the track simultaneously.
It’s a thrill unlike anything in drag racing and Johnson has always enjoyed the intricacies of the unique race, which also takes place in Charlotte at zMAX Dragway. With double the amount of cars, it presents new challenges and difficulties, but Johnson, currently sixth in Funny Car points, likes the extra elements of facing off with three other cars.
“It definitely takes a lot more thinking as a driver because there’s a lot more going on,” said Johnson, who has 17 career wins. You have to have your act together and be aware of what’s going on. Me, personally, I like it. It adds a new level of difficulty, but if you can overcome that and excel at it, it gives you an advantage. There’s certain things you have to add to your routine just because of this event. It’s just another level of having to remind yourself. You can easily fall back into habits that can really bite you.”
It’s been a solid start to 2018 even as the team, led by crew chief John Collins, started using a new six-disc clutch set-up this season, reaching the final round in Phoenix and qualifying well at Gainesville. Johnson also knows what an early-season win can do for a team, especially in a loaded Funny Car class that features Don Schumacher Racing teammates Matt Hagan, the current points leader, Ron Capps and Gainesville winner Jack Beckman, as well as Phoenix winner Courtney Force, defending champ Robert Hight, Shawn Langdon, Del Worsham and Jonnie Lindberg.
“Winning an event early really takes the pressure off,” said Johnson, who finished a career-best second in 2016. “It allows you to do different things. We’re still learning the six-disc, but we’re making big progress. At Gainesville, we learned something very huge. We came into this season knowing we’re going to be learning the first part of the season, but right now we’re on a good track. I’m happy with the progress we’ve made and I think we’re running better than maybe we would have expected.”
Brown earned his second straight win at the spring Vegas race in Top Fuel in 2017, and is seeking his first win in 2018 against the likes of points leader Steve Torrence, Gainesville winner Richie Crampton and defending world champ Brittany Force.
Gray became the youngest Pro Stock winner in NHRA history a year ago and just won in Gainesville. He’ll face off with points leader Bo Butner, Jason Line and Erica Enders.
The event also features the K&N Horsepower Challenge for eight top Pro Stock drivers. Bragging rights and a hefty $50,000 paycheck is on the line for the Saturday specialty race. Greg Anderson has won two straight K&N Horsepower Challenge races.
The event also features competition in the NHRA Lucas Oil Drag Racing Series, as well as the Mickey Thompson Tires NHRA Top Fuel Harley Drag Racing Series. After nitro qualifying on Friday, the Segal Motorsports Fire Starter, American Freedom Fighter & Lucas Oil Muy Caliente Jet Cars will thrill the fans. Known for their pre-run flame shows and after burner pops, jet cars are thrust driven vehicles propelled by jet engines.
As always, fans will have the opportunity to interact with their favorite drivers as they’re granted an exclusive pit pass to the most powerful and sensory-filled motorsports attraction on the planet. This unique opportunity in motorsports gives fans direct access to the teams, allowing them to see firsthand the highly-skilled mechanics service their hot rods between rounds, and get autographs from their favorite NHRA drivers. Fans also will want to visit NHRA’s popular Nitro Alley and Manufacturers Midway, where sponsors and race vendors create a carnival atmosphere, with interactive displays, simulated competitions, merchandise, food and fun for the entire family.
Mello Yello Drag Racing Series qualifying will feature two rounds at 12:30 and 3:30 p.m. on Friday, April 6 and the final two rounds of qualifying on Saturday, April 7, at 12:10 and 2:45 p.m. Final eliminations are scheduled for 12 p.m. on Sunday, April 8.
To purchase general-admission or reserved seats, call (800) 644-4444 or visit www.NHRA.com/tickets. Kids 12 and under are free in general admission areas with a paid adult. To honor the Salute to First Responders, military and first responders can save 20 percent on general admission tickets at the gate. For more information about the NHRA visit www.NHRA.com.
NHRA PR/Photo NHRA Media