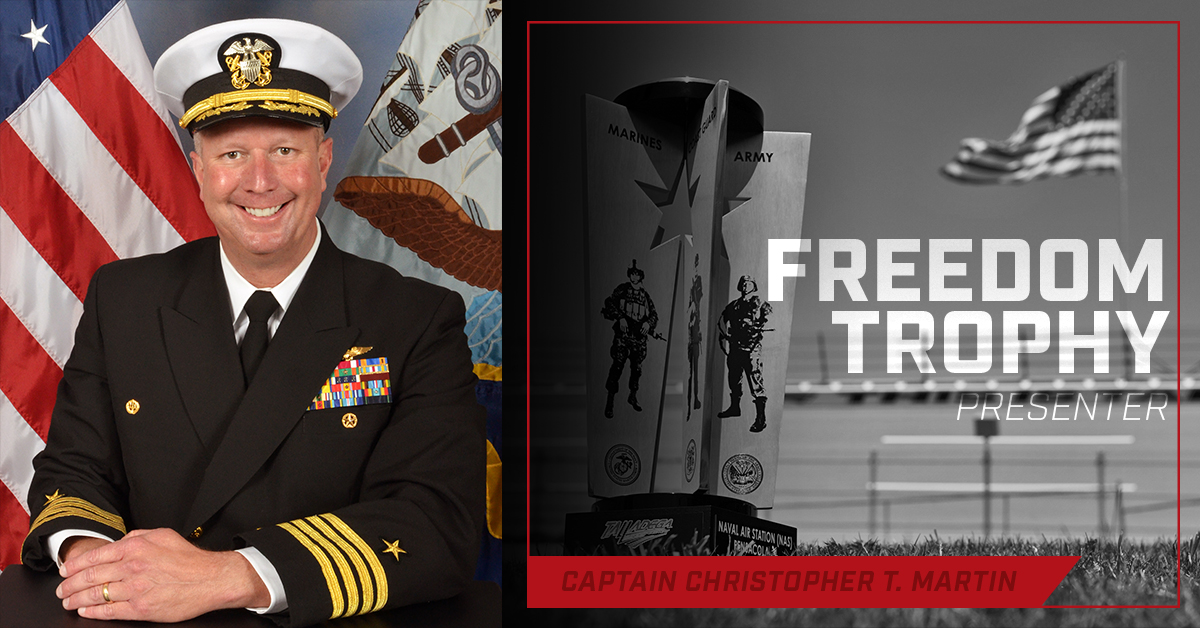 This distinctive piece of hardware, introduced in the spring of 2014, features five-sided silver aluminum panels centered around a waterjet cut star. Each panel is engraved with a military member and logo from one of our nation’s five military branches. It has been presented to Talladega Superspeedway winners in NASCAR’s premier series by members of the Army, Navy, Air Force, Marines and Coast Guard.

Born and raised in Tennessee, Captain Martin enlisted in the U.S. Navy in 1984, where he served as an Aviation Electronics Technician, Air Warfare qualified. He then attended Auburn University, earning a Bachelor of Science degree in Aviation Management. Upon graduation, he commenced his flight training, earning his “Wings of Gold” in July 1995.

Upon completion of further training, Captain Martin reported to the “Bluetails” of VAW-121 in 1996, where he deployed onboard the USS JOHN C. STENNIS (CVN 74) for her maiden voyage around the world. After successful tours with VAW-120 and VAW-124, he reported to the Naval War College in Newport, Rhode Island, completing Joint Professional Military Education Phase Two and earning a Master of Arts degree in National Security and Strategic Studies in 2008.

In addition to presenting the Freedom Trophy to the winner in Gatorade Victory Lane, Captain Martin will be recognized in the official drivers meeting the morning of the GEICO 500, as well as be introduced to the fans as part of the pre-race festivities.

For more information on the highly-anticipated weekend, featuring the General Tire 200 for the ARCA Racing Series, the Sparks Energy 300 for the NASCAR Xfinity Series and GEICO 500, visit www.talladegasuperspeedway.com or call 855-518-RACE (7223).