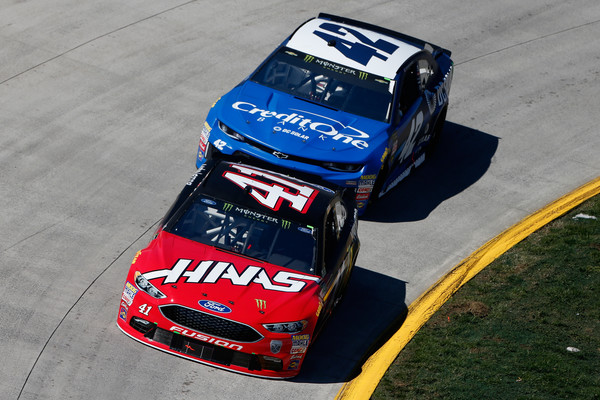 ● The No. 41 Haas Automation/Monster Energy Ford Fusion was loose early on.

● On lap 52, Busch pitted for four tires, fuel and a tire pressure adjustment.

● Busch pitted on lap 265 for four tires, fuel and a wedge adjustment.

● After a quick caution, Busch pitted on lap 130 for four tires and fuel, running in 11th.

● Still trying to find a little rear grip as the race came to a close, Busch managed to secure a solid 11th-place finish while teammate Bowyer crossed the finish line first to score the win for Stewart-Haas Racing (SHR).

● Bowyer’s victory in the Martinsville 500 marked the 47th overall win for SHR. It was the organization’s 43rd points-paying Monster Energy NASCAR Cup Series win and its fourth at Martinsville.

● This was SHR’s seventh Cup Series victory with Ford. The team won its first race with Ford when Busch captured the 2017 Daytona 500.

● It was SHR’s fourth victory in the first six races of 2018, as Harvick scored back-to-back-to-back wins at the second, third and fourth events of the season at Atlanta Motor Speedway, Las Vegas Motor Speedway and ISM Raceway near Phoenix.

● This was the second time in five races that all four SHR cars finished in the top-14.

● There were four caution periods for a total of 33 laps.

● Fourteen of the 38 drivers in the Martinsville 500 finished on the lead lap.

● Bowyer’s margin of victory over second-place Kyle Busch was 1.146 seconds.

The next event on the Monster Energy NASCAR Cup Series schedule is the O’Reilly Auto Parts 500 on Sunday, April 8 at Texas Motor Speedway in Fort Worth. The race starts at 2 p.m. EDT with live coverage provided by FS1.