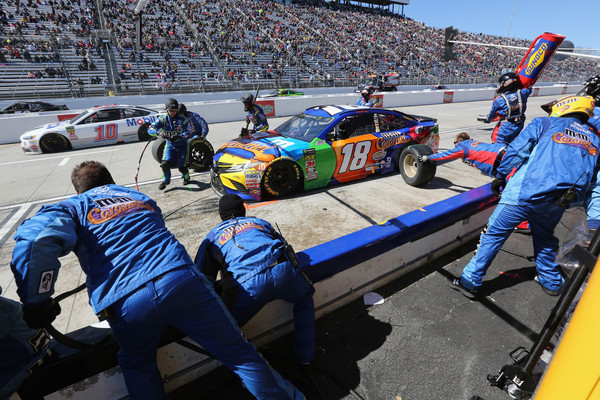 ● M&M’S Caramel driver Kyle Busch started second in Monday’s weather-delayed STP 500 and by lap five he was in the lead. He spent the next several circuits around the paper-clip-shaped Martinsville track in the lead before relinquishing the top spot to teammate Denny Hamlin on lap 27.

● Busch was in second place when the first caution was displayed on lap 50, reporting that the car lacked rear grip. The team made a series of air pressure adjustments, changed four tires and added fuel. Quick pit work enabled Busch to maintain second place for the restart on lap 56.

● The handling issue Busch reported persisted throughout Stage 1. He dropped a couple positions to fourth place by lap 91 and maintained the position to the conclusion of Stage 1.

● The M&M’S Caramel team made additional air pressure and chassis adjustments, changed four tires and added fuel during the caution period. Busch maintained fourth place for the start of Stage 2.

● Throughout all of Stage 2 Busch kept pace between third and fourth place. As the stage drew to a close, Busch reported that the car’s handling at the exits of the turns was better but that it had started to get a little tight in the front end.

● Busch was in third place at the conclusion of Stage 2. He noted that the car needed a little more help with both chassis and air pressure adjustments. The team obliged, adjusting wedge and air pressure, changing four tires and adding fuel.

● Quick pit work placed Busch in second place for the start of Stage 3.

● Busch was in second place early in Stage 3 when he reported that the adjustments didn’t do a lot to improve the car’s handling at the exits of the turns and had also started to affect the handling in the center. He managed to maintain the second position until a caution waved on lap 383, giving him an opportunity to make a trip to pit road for adjustments.

● Anticipating a long, green-flag run, the team made air pressure adjustments to help the car’s handling at the exit of the turns and to help maintain speed for a long period. Quick work for four fresh tires and fuel placed Busch in second place for the restart on lap 391.

● The 2015 NASCAR Cup Series champion quietly logged laps throughout the last fifth of the race. While the handling on the No. 18 M&M’S Caramel Toyota improved, it wasn’t quite enough to keep pace with race leader and eventual race winner Clint Bowyer.

● Busch went on to finish the race in second place, his third runner-up result of the 2018 NASCAR Cup Series campaign.

● While he didn’t get the win, the second-place finish gave Busch the points he needed to take over the top spot in the championship point standings.

● Busch led three times for a total of 24 laps.

● Busch second-place finish is his fourth top-five and fifth top-10 of the 2018 NASCAR season.

“Our M&M’S Caramel Toyota was good today – actually better than it had been during practice on Saturday. There was a lot of things kind of going on here all throughout the day. There were some guys we kind of expected to battle that we did early in the race, but then we had some guys toward the end – like the 14 (Bowyer) – that we never saw coming and didn’t expect based on practice Saturday. Those guys were good when it counted, obviously. I tried to make sure that I saved enough of the car to be able to go get him there at the end when he got to the lapped traffic. There was just nothing to go with. We’re close. We’re right there each and every week – you know (crew chief) Adam (Stevens) and myself and all these guys. We keep executing. We keep doing a good job, but it’s not quite good enough yet. We’re a championship-caliber team and know that we will get there.”

Next Up: The next event on the Monster Energy NASCAR Cup Series schedule is the O’Reilly Auto Parts 500 on Sunday, April 8 at Texas Motor Speedway in Fort Worth. The race starts at 2 p.m. EDT with live coverage provided by FS1.