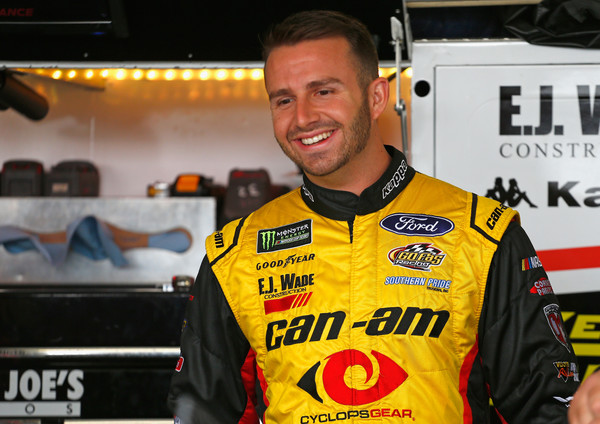 After racing at one of the biggest super speedways on the circuit and finishing their west-coast trip, the Monster Energy NASCAR Cup Series teams are making the short drive up to Martinsville Speedway this weekend. The 0.526 mile racetrack based in Ridgeway, Virginia will be the site of the sixth points-race of the 2018 Cup Series schedule.
Hot Tempers and Cold Temperatures:
Martinsville Speedway can be one of the most frustrating racetracks on the circuit for drivers. With sharp corners and a narrow groove, the “Half Mile of Mayhem” is notorious for a throwback style of racing. Drivers will often bump and move each other out of the way, and DiBenedetto is not one to shy away from that sort of action. The race weekend at Martinsville is usually one of the coldest races of the season, but this weekend it’s expected to be especially cold with high’s barely in the 40’s and several inches of snow expected Saturday.
“Martinsville is one of those tracks that you definitely mark off on your calendar. It’s easy to lose your temper there, but you just have to keep calm and get by guys as efficiently as possible. You end up racing around the same guys just about all day, so you’ve just got to be smart when using the bumper and not lose time behind slower traffic. We didn’t have very good luck there last year but we had great race cars and I’m hoping we can get the finish we deserve this weekend,” DiBenedetto said.
Last Week for the No.32 Team:
The Monster Energy NASCAR Cup Series finished their west coast trip out at Auto Club Speedway in Fontana, California. DiBenedetto had one of the best qualifying efforts in his and Go Fas Racing’s history last weekend with an 18th-place result. DiBenedetto and the No.32 team were able to stay on the lead lap for most of the race, but a visibility issue caused him to get into the wall in the final stage of the race, cutting a right-front tire. The damage caused multiple flat tires but the team was able to bring home a 31st place finish.
DiBenedetto on Martinsville Speedway:
“Martinsville is definitely a tough track. It’s hard to put a fast lap together for qualifying and really hard to work through traffic throughout the race. Track position is big because of how hard it is to pass and restarts are extremely important. Guys get really stacked up on restarts but generally you just want to get to the bottom-groove as quickly as possible and hope it works out. In the past, we’ve had back luck there, but really good race cars, so I’m hoping we’ve gotten the bad luck out of the way and can put a complete race together. It’ll be important to stay as close to the lead lap as possible and keep my nose clean as long as possible.”
Matt DiBenedetto Career Monster Energy NASCAR Cup Series Stats at Martinsville Speedway
Starts: 6
Average Start: 32.8
Average Finish: 32.67
Best Finish: 29th (2016)
Go Fas Racing PR/Photo Matt Sullivan/Getty Images