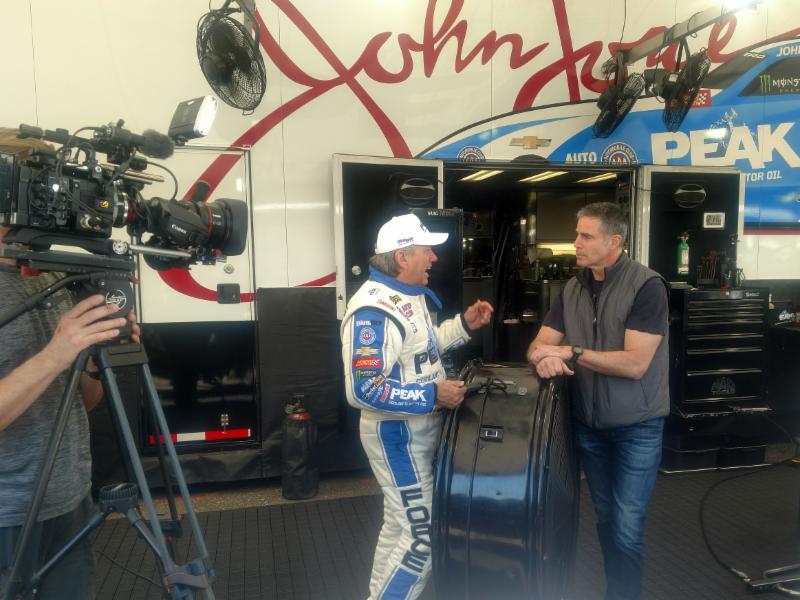 John Force Racing spent four days with the award-winning HBO sports journalism series ‘Real Sports with Bryant Gumbel’ over the past two weeks. The dynamic team, headed by NHRA great John Force, will be featured on the Emmy winning show Tuesday, March 27 at 10:30 p.m. ET/PT.
“Who doesn’t love HBO? I’m excited to have them feature not just my family but our sport. I have to give it to the crew: They really worked hard and gave it the time that it needed,” said Force, the 16-time NHRA Funny Car world champion. “I haven’t seen the show so the proof is in the pudding but I know it’s going to be great. They put four days of filming into it. And I want to thank NHRA for the help they gave getting HBO the footage they needed on track.”
Esteemed journalist Jon Frankel conducted the interviews of the first family of drag racing both in their hometown of Yorba Linda, Calif. and at one the biggest events on the NHRA Mello Yello Drag Racing series schedule, the Amalie Motor Oil NHRA Gatornationals held at Gainesville Raceway. Frankel takes a detailed look at the family, their racing and Force’s rags to riches story.
Real Sports is TV’s most-honored sports journalism series, with a record 31 Sports Emmy Awards, including 18 for Outstanding Sports Journalism. Now in its 23rd season, the monthly magazine TV show produces unchartered investigative pieces and in-depth profiles from across the sports spectrum.
JFR PR