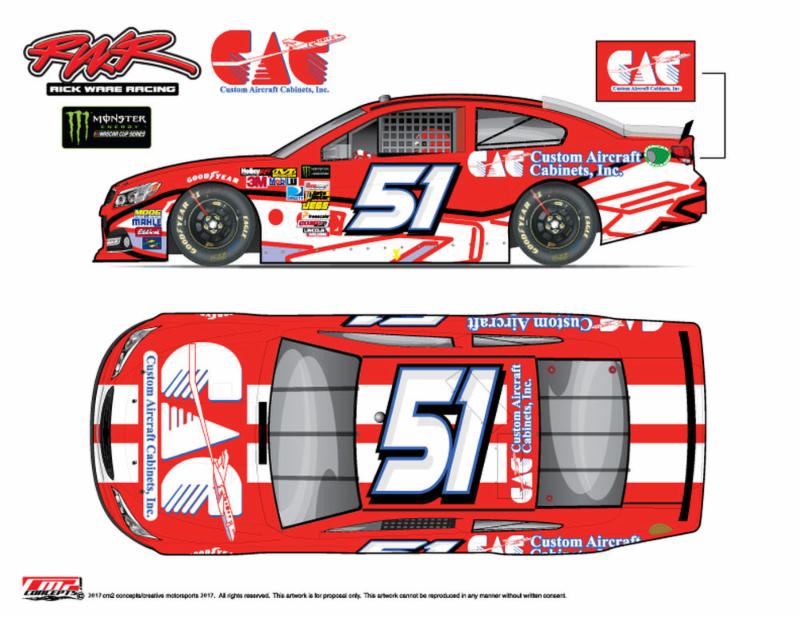 After making his Monster Energy NASCAR Cup Series (MENCS) debut at Atlanta (Ga.) Motor Speedway last month, NASCAR Xfinity Series regular Harrison Rhodes (@HarrisonRhodes) returns to Rick Ware Racing’s No. 51 chartered Chevrolet for Sunday’s STP 500 at Martinsville (Va.) Speedway.
Joining Rhodes in his debut at Martinsville is primary marketing partner Custom Aircraft Cabinets (CAC).
Custom Aircraft Cabinets has been providing luxurious interiors for private, corporate and head-of-state aircraft since 1989. CAC manufactures the highest quality cabinetry, upholstered interior products from a state-of-the-art facility in North Little Rock, Arkansas.
“CAC is very proud to sponsor and be a part of Rick Ware Racing and it is an honor to be included with their team,” stated Paul Reesnes, co-owner of Custom Aircraft Cabinets.
Mike Gueringer, co-owner of CAC added, “This is a great way for CAC to expose our products and services to a most discerning audience.”
RWR team principal Rick Ware says he’s excited to debut a new partnership with his team at the sport’s pinnacle level – and have a qualified driver like Rhodes behind the wheel at Martinsville’s famed paperclip oval.
“I’m very appreciative of Custom Aircraft Cabinets and their support of our team this weekend,” said Ware. “They’ve taken a head-first approach with this new opportunity to support a Monster Energy NASCAR Cup Series team and I hope this is a partnership that everyone will see expand throughout the year.
“I’m equally excited to have Harrison back behind the wheel for us this weekend. He flew under the radar at Atlanta but learned a lot and showcased his ability to respectfully compete in a Cup race. Martinsville isn’t an easy track, but with his desire, dedication and focus, I think he’ll be fine on Sunday.”
A native of High Point, N.C., Rhodes has spent the last five years competing in the Xfinity Series for a variety of different organizations. Last year, the 24-year-old competed in 31 races driving for JD Motorsports with Gary Keller earning a season-high 10th place finish in the season-opening race at Daytona.
“I’ve never been to Martinsville, but I’m optimistic about our chances,” added Rhodes. “I’m grateful to Custom Aircraft Cabinets and Rick (Ware) for giving me an opportunity to compete in another Cup race.
“I think our goals for this weekend are obtainable. We just need to make gains from practice to qualifying and see the checkered flag on Sunday. If we can do that – we can continue to build as a team and set our expectations a little higher for the next race.”
In addition to Custom Aircraft Cabinets, RWR is proud to carry the support of Keen Buildings,Spoonful of Music, American Dream Leasing and Financing and Industrial Construction Experts as associate marketing partners for the sixth race on the 2018 Monster Energy NASCAR Cup Series tour.
For more on Rick Ware Racing, please “like” them on Facebook(Facebook.com/rickwareracing) or visit WareRacing.com.
Rick Ware Racing is on Twitter. Follow them @RickWareRacing.
Learn more about Harrison Rhodes at harrisonrhodesracing.com, like him on Facebook or follow him on Twitter.
RWR PR