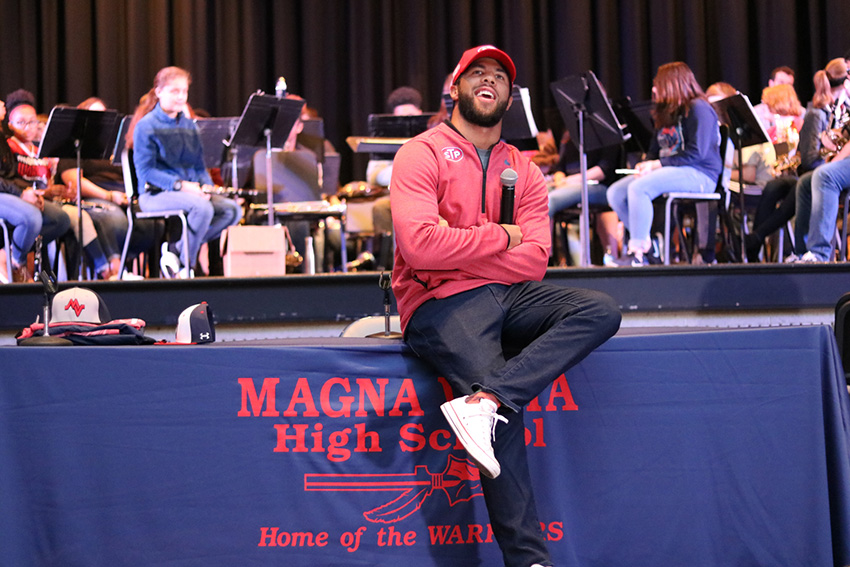 Magna Vista High School students had a special lecture from a visiting professor on Tuesday afternoon. Darrell ‘Bubba’ Wallace Jr. spoke in the auditorium just six miles from Martinsville Speedway, touching on topics from the Famous Martinsville Speedway Hot Dog to how to approach life after graduation day to what he hopes to accomplish in the STP 500 on Sunday.

He said afterwards his goal on Tuesday was to impart a little wisdom, while his goal on Sunday is simple – win.

“It was a lot of fun,” Wallace said. “I can remember when I was in high school, it was just a handful of years ago. I know what they’re going through. It’s always a good time being able to share my passion and share what I do for a living with them. I think they were able to enjoy it and I was able to enjoy it for sure.”

Wallace is no stranger to Martinsville Speedway, having claimed a pair of wins at the historic half-mile in the NASCAR Camping World Truck Series. He is also no stranger to some of the students on hand, some of whom he spoke to when they were students at Laurel Park Middle School.

He emphasized a few life lessons for the youngsters again on Tuesday.

“We were all in high school. The real world, it doesn’t wait up on you. It’s here as soon as you’re done with school. The biggest thing is you have to be prepped for that, you have to be ready for it,” Wallace said. “I wanted to focus on how to win at Martinsville but I also had to focus on passing my next math quiz too. The real world is a lot tougher than that. Kids need to realize that.”

Although being 24 and dealing with bills and taxes is “not fun” according to the driver of the No. 43 STP-sponsored Richard Petty Motorsports machine, he was happy with the inquisitive nature of the crowd on hand in Ridgeway.

“They seemed like a lively bunch,” Wallace said. “Great audience the whole time, great questions, it was a great visit.”

When asked about his success at Martinsville, especially in the Truck Series, he gave himself a quick pop quiz. A pop quiz that he knows the answers to, inside and out.

“I do the math every chance I get, second, first, first, fifth, I think that’s an average of 2.1 or maybe better. Not to toot my own horn but I love this place, obviously,” Wallace said. “It’s a place I fell in love with as soon as I got here…To be able to come back here three and a half years later in the Cup series is a homecoming for me. This is such a special weekend.”

As for that goal of getting a grandfather clock in the Monster Energy NASCAR Cup Series on Sunday? Wallace knows the task ahead of him will be difficult, but he said he is ready to face it.

“I know how tall that task is, but I really want to show why I love this race track,” Wallace said. “I think that is going to shine through and be like ‘he’s pretty good here’. That’s what we’re hoping for.”

The current leader in the Sunoco Rookie of the Year points standings added that he isn’t afraid of a little physical racing.

“We’ve got a bumper for a reason. We may not have to use it, we may have to,” Wallace said. “You’re bumper-to-bumper from start to finish. You’re always on the move. There’s always close-quarters contact…There’s always action going on and that’s why it’s the best short-track we go to. I love it.”