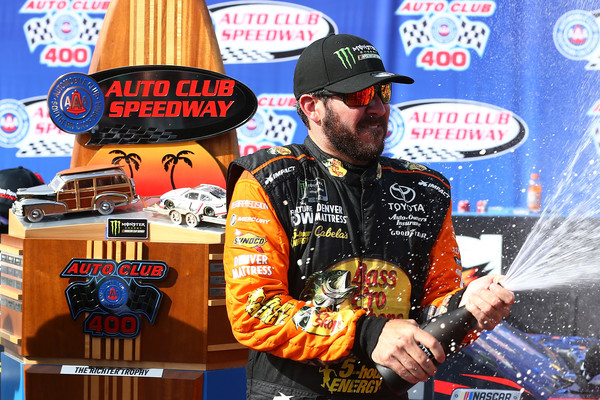 It was a perfect weekend for Martin Truex Jr., who dominated and won Sunday’s NASCAR Cup Series race at Auto Club Speedway in his No. 78 Bass Pro Shops/5-hour ENERGY Toyota.
Not only did the Furniture Row Racing driver dominate the 200-lap race with a 11.685-second margin of victory over Kyle Larson, he started from the pole, captured the first two stages, led the most laps (125) and moved into first place in the driver point standings.
The reigning NASCAR Cup Series champion also became the first driver to start from the pole and sweep all the stages.
The victory was Truex’s first of the season and 16th of his career (14 with Furniture Row Racing). The victory was also the 15th career win for the Denver, Colo.-based Furniture Row Racing.
After five races of the current season Truex has accumulated one win and four consecutive top-fives. The victory virtually assured Truex a berth in the post-season playoffs.
When asked how it feels to be back in Victory Lane after winning eight races last year Truex said, “It feels great, it’s good to be here. I am really proud of my team and everybody here. We’ve started the season off strong. Everyone kept asking when we were going to win and we hadn’t won any stages yet. And I said, ‘don’t worry, we are close. We just need to figure it out a little bit.’
“And today, what a hotrod. This thing was unbelievable. I knew we were close yesterday in practice but we needed to get better to win. Cole (Pearn, crew chief), Jazzy (Jeff Curtis, lead engineer) and Pete (Rondeau, director of competition) and those guys really came up with a game plan last night. We changed a few things and they had to hook both corners together. We were really loose off Turn 4 yesterday and really tight off Turn 2. We just got better off 4 and 2, and when you do something big like that, it makes a huge difference. This thing was flawless.
“Thanks to all the guys and everybody at Toyota, TRD (Toyota Racing Development), Bass Pro Shops, Tracker Boats, 5-hour ENERGY, Auto Owners Insurance, Furniture Row, Denver Mattress and all of our sponsors that help support this deal. It’s a dream come true and this team is unbelievable.”
Truex, who had a feeling that the 2-mile Southern California track was going to be his first win before the three-race Western Swing started, was strong from the get go.  He did drop to fifth at one point of the race, but retook the lead for good on Lap 169 and then proceeded to pour it on in the final 32 laps.
“We were just fighting hard and never gave up on it,” Truex explained. “I knew we really had a good racecar after the first adjustment of the race. The thing just came alive. From there it was just about managing my tires and being smart. We had a little trouble getting beat out of the pits and that was tough. At one run we fell back to fifth and then we needed to work our way back up.
“I really just needed to take care of my front tires and once we got some clean air this thing was unbelievable. I just have to thank Cole, Barney (Visser, team owner) and everybody back in Denver. I was out at TRD this week and they gave me this hat. It must be good luck. Thank you guys for great engines.”
The balance of the top-10 finishers were: Kyle Larson, Kyle Busch, Brad Keselowski, Joey Logano, Denny Hamlin, Erik Jones, Ryan Blaney, Jimmie Johnson and Austin Dillon.
The Auto Club 400 race had five cautions for 21 laps and there were 16 lead changes among seven drivers.
The next race is Sunday March 25 at Martinsville (Va.) Speedway.
FRR PR/Photo Sarah Crabill/Getty Images