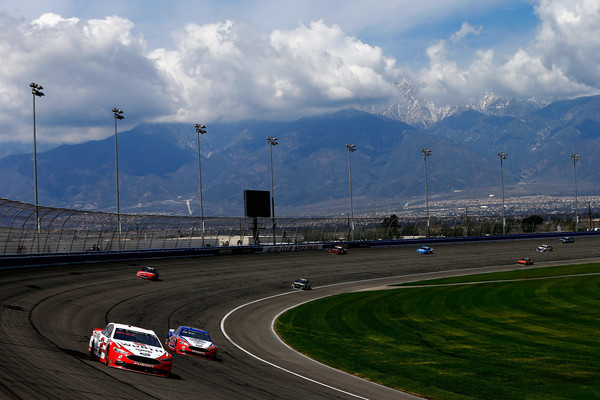 “Martin was real strong for sure.  I’m not sure what happened there to Kevin, but we were really good on the short runs and made some good moves and led to a decent day.”

THE SHORT RUN VS. THE LONG RUN.  IS THAT WHAT BIT YOU TODAY?  “We had exceptional speed today with the Wurth Ford Fusion on the short runs, but not very much for them there on the long runs, that’s for sure.  I was hoping to get a late-race caution and I could make it exciting for the fans that are here, but it didn’t pan out that way.”

“I went down to side draft and he was coming up and we touched, and it just knocked the thing to the right and spun out.  I don’t know that it’s his fault.  I think that’s my fault for coming down the race track right there and trying to side draft and then as we touch it just came back up the race track.  I was just trying to get a little too much right there.  I knew the stage was coming in.  I’ve just got to thank all of my guys.  They did a great job on our Busch Beer Ford and it was just my fault back there.”

WAS TRACK POSITION JUST SO MUCH THAT YOU FELT YOU NEEDED TO SIDE DRAFT AT THAT POINT?  “It’s a race.”

“It’s not something where you would normally where you would keep it on the outside of him (the 31).  He was a little faster than us, but the 78 was coming.  I saw the 21 was having issues, so you have to stay in that lucky dog spot or the free pass, so I stayed on the outside of the 31 and he just kept coming up and squeezed us into the fence.  I think he thought he would clear us and I was still just there.  It’s unfortunate.  It wasn’t really that much contact and I didn’t smell that bad of smoke through turn one and two, but then coming down the back I thought we better just hit pit road because we had a lot more to lose than to gain by staying on the race track.  I turned to come down pit road and as soon as I turned off the wall the right-front blew at 200-whatever we’re doing here and the problem with here is you see the wall coming forever, so that’s not a fun ride when you’re on the brakes and it isn’t slowing down and it’s not turning.  You know you’re going to hit hard, and I feel like I should be hurting right now as hard as that was, so that’s a testament to what NASCAR has done with safety because I feel like I should be looking at you funny right now and I feel great.  That was a hard hit.”

“The 78 had a great car.  I was in front of him for about five laps and I was like, ‘Hey,’ but it was short-lived.  Overall, it was a good weekend.  We got a top-five here and a win yesterday is great.  I would have liked to sweep the races here at Auto Club and we’re just trying to get this Auto Club Fusion to Victory Lane at Auto Club Speedway.  I’ve been so close for quite some time now and it’s been a great race track for us and a lot of fun to race here, I just need more speed to be able to keep up there.  We made one change that the car didn’t like right before the last stage and we lost some track position there, and by the time we were able to start catching back up it was too late.  We probably could have finished fourth, maybe third at the end if we didn’t have that bad run, but overall that’s where we’re at.”

ANY WAY TO TELL HOW YOU STACK UP WITH THE 4 AND THE 78?  “No.  Kevin, I’m sure he was gonna be good.  Who knows?  He was really good in practice and it was a weird situation on how they crashed.  It was right in front of me.  I saw the whole thing.  They were racing the heck out of each other.  It was something to watch and then they wadded them up, so it’s hard to say where he would have been.  I’m sure we still have work to do.  Either way, it doesn’t matter if it’s against the 4 or the 78 we got beat today, so we have work to do.”

WHAT DID YOU SEE WITH THE 4 AND 42 SINCE IT WAS RIGHT IN FRONT OF YOU?  “I don’t know if there’s some history there or something.  I don’t know.  It seemed kind of odd to be the first run of the race like that and they were dooring each other pretty hard.  I don’t know exactly what the story is, but that’s up to you guys to figure out.  That’s not up to me.  You guys are the reporters.”

IS YOUR LEVEL OF OPTIMISM GETTING BACK TO WHERE YOU THINK IT SHOULD BE WITH YOUR TEAM?  “Yeah, if you run in the top five, I mean, we ran top five all day long from the first run all the way to the end.  My pit crew was incredible today. It was one of the most unbelievable days on pit road I’ve ever seen, so they were on fire.  Are we as fast we need to be yet? No, but we’re getting closer.  Take Phoenix out for whatever reason the whole company can’t go fast at Phoenix, but today we had some decent speed and it’s progress.  It’s progress in the right direction.  We still have a ways to go, but we’re getting closer to where we can have solid runs, score stage points, score good finishes and keep ourselves up there for points.”

THE MODERATOR:  Brad, talk about your day a little bit.

BRAD KESELOWSKI:  Yeah, sure.  I’m not really sure why I’m here.  I finished fourth (smiling).

But, yeah, kind of got the most we had out of it today.  We had some decent short run speed that could run and keep those guys honest.  But after about five laps, we were just kind of holding on, running it out, trying to hope for a late race yellow or something to have something for them.

All in all, a decent weekend.  We unloaded really not very good at all.  Looked like it was going to be a really long weekend.  Made some good improvements through practice and qualifying and all those things, got to where we were good enough to run here back half of the top five.  Just have a solid day.  That’s what today was.

Q.  Brad, with Ford and what they’ve done this year obviously with Kevin winning three races, are you optimistic on how the Fords will do this year, or are you anticipating getting the new body next year?

BRAD KESELOWSKI:  Well, I think Kevin has been off to a great start.  The rest of us maybe just kind of so‑so.  We haven’t really competed, I don’t feel like, for a win anywhere.  We’ve been right in that 5th to 10th range I think over the last four or five weeks.

Maybe you could argue we’re capable of a lot more.  We were capable of winning at Daytona.  That turned into what it was.

It’s still pretty early, but Kevin is making it look pretty easy when things go his way.  The rest of us are just kind of 5th to 10th.

Q.  Brad, what is the impact of Harvick not winning now after he won three?  Does everybody feel better?

BRAD KESELOWSKI:  I don’t know.  Do you feel better (laughter)?

Q.  Doesn’t matter to me.  But if he won another, it’s four in a row, momentum continues to build.  Does that take some of the edge off that or not?

BRAD KESELOWSKI:  I don’t know.  I still think the 4 car is probably the best car in the field right now.  Things didn’t come together for him today.  There will probably be a race in the future where he’s not the fastest and it does come together.  That’s how things work.

I don’t think anything changes with the 4 car being the fastest car in the field right now.  I can’t speak for the internals of their team.  I could speak for mine in that I would move on a little disappointed and still be pretty happy to be the fastest car.