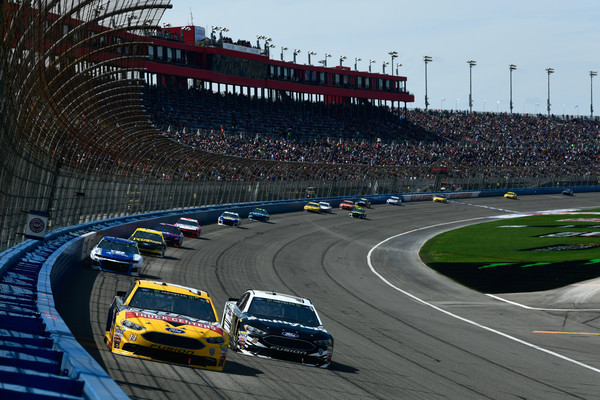 ● Faded back in the field as he told the crew his car wouldn’t turn well in turns three and four.

● Lap times were again among the best on the track.

● Crew continued to work to make the car turn better in the corners.

● Bowyer reported slight wall contact in the closing laps, but it required only minor repairs.

● Made his final green-flag pit stop with 40 laps left in the race.

● While running ninth and with about 10 laps to go, Bowyer reported his tire was going down.

● He slowed hoping to make it to the finish and fell back to 11th.

● Bowyer said the tire came apart on the final lap, but he still managed to finish.

● Truex won the Auto Club 400 to score his 16th career Monster Energy NASCAR Cup Series victory, his first at Fontana and first of the season. His margin of victory over second-place Kyle Larson was 11.685 seconds.

Clint Bowyer, driver of the No. 14 Rush Truck Centers Ford for Stewart-Haas Racing:

“We got really lucky to finish this race today. That tire was coming apart, and I didn’t think we had any chance of making it to the checkered flag – but it did. We wanted more than 11th, and at times today we were really good. We got some stage points, but we have some work to do. We’ll be ready for Martinsville.”

The next event on the Monster Energy NASCAR Cup Series schedule is the Martinsville 500 on Sunday, March 25 at Martinsville (Va.) Speedway. The race starts at 2 p.m. EDT with live coverage provided by FS1 beginning at 12:30 p.m.