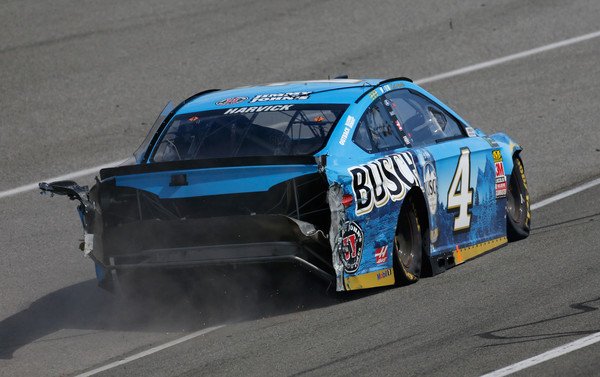 ● Harvick started 10th and after dropping to 12th, roared up to third place by lap 34.

● Contact with Kyle Larson on lap 38 as the two raced for position off turn two sent Harvick into the backstretch wall.

● Two trips to pit road were made to repair the No. 4 Busch Beer Ford Fusion, and Harvick returned to the track two laps down.

● At the end of Stage 1, Harvick was three laps down.

● Harvick’s bid for a fourth-straight win was effectively over. He came into Auto Club Speedway having won last Sunday at ISM Raceway near Phoenix, March 4 at Las Vegas Motor Speedway and Feb. 24 at Atlanta Motor Speedway.

● Started 37th and finished 36th. Gained one position when Trevor Bayne retired from the race.

● Picked up a position by passing Jeffrey Earnhardt for 35th in the race’s closing laps.

● Martin Truex Jr. won the Auto Club 400 to score his 16th career Monster Energy NASCAR Cup Series victory, his first at Fontana and first of the season. His margin of victory over second-place Larson was 11.685 seconds.

Kevin Harvick, driver of the No. 4 Busch Beer Ford Fusion for Stewart-Haas Racing:

“I went down to side draft and he (Larson) was coming up and we touched, and it just knocked the thing to the right and spun out. I don’t know that it’s his fault. I think that’s my fault for coming down the racetrack right there and trying to side draft and then as we touch it just came back up the racetrack. I was just trying to get a little too much right there. I knew the stage was coming in. I’ve just got to thank all of my guys. They did a great job on our Busch Beer Ford and it was just my fault back there.”

The next event on the Monster Energy NASCAR Cup Series schedule is the Martinsville 500 on Sunday, March 25 at Martinsville (Va.) Speedway. The race starts at 2 p.m. EDT with live coverage provided by FS1 beginning at 12:30 p.m.