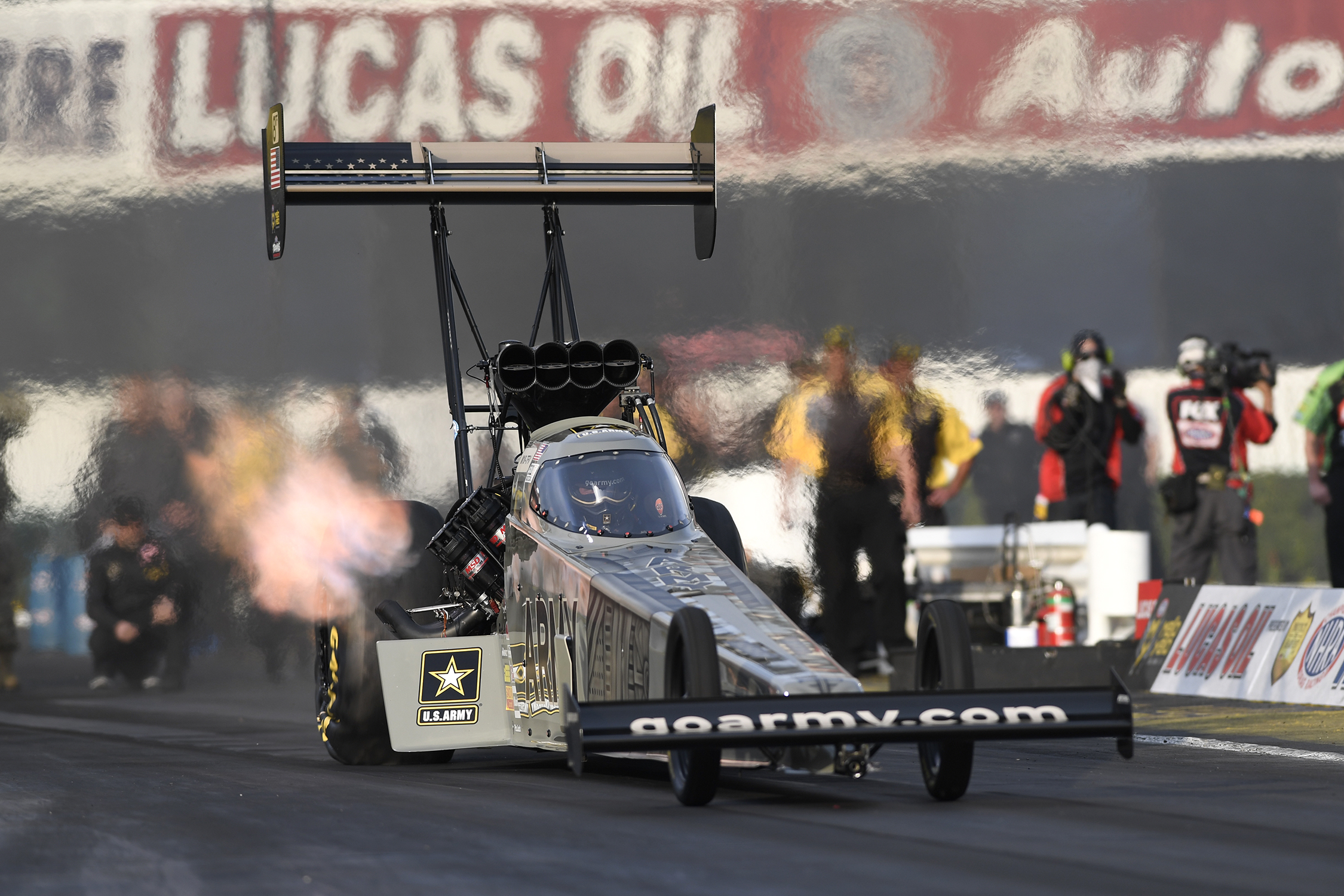 Leah Pritchett 5th (3.811 Seconds at 325.77 mph)
The U.S. Army driver trio of Tony “The Sarge” Schumacher, Antron Brown and Leah Pritchett are fourth, third and fifth, respectively, on the provisional ladder after the opening two rounds of qualifying Friday for this weekend’s NHRA Mello Yello Drag Racing Series 49th annual NHRA Gatornationals at Gainesville (Florida) Raceway.
Schumacher and his U.S. Army Dragster team for Don Schumacher Racing (DSR) started the day with the best run of the opening session posting a lap of 3.785 seconds and a track record speed of 329.67 mph. In the second session, the U.S. Army Racing team was forced to wait out a lengthy delay and “The Sarge” lost traction early in the pass and coasted to a run of 7.873 seconds at 84.21 mph.

“I’d rather make the run we made in Q1 any day over a big run where you are swinging for the fences on Friday night,” said Schumacher, the eight-time Top Fuel world champion who’s vying for a record sixth career Gatornationals event title this weekend.

“Don’t get me wrong. I wish we would have went down the track (that second run) and maintained the top spot, but the run to start the day was impressive in every way. We don’t race in the conditions like we had tonight. We were set up for a run on a track well over 100 degrees and by the time we actually ran it was more like 88 or 89 degrees. It’s hard to make all the changes that you want when the difference in temperature is that drastic. We made a great run today in the heat. It was textbook and that’s what we’ll be dealing with Sunday. We’re good. I’m looking forward to getting this U.S. Army machine even better tomorrow.”

Brown and his Matco Tools/U.S. Army Dragster for DSR started the day with a run of 4.894 seconds at 150.03 mph in today’s opening session. He and his team led by crew chief Mark Oswald came back with a vengeance Friday evening making a run of 3.751 seconds at 327.24 mph that was third-best for the session and third overall.

“We didn’t start the day where we wanted to,” Brown said. “Our first run was a little rough. We spun the tires about 200 feet. It felt like the car was on a good run. We came back and made a nice solid pass down the track that will put us securely in the field. All in all, the Matco Tools/U.S. Army car is in a good place. We feel confident for tomorrow. It’s going to be another day where we can build off that second lap we made today. The name of the game is to just keep on trying to improve and continue getting better. We want to be at our best on Sunday this weekend.”

Pritchett had an up and down day aboard the Papa John’s/FireAde/U.S. Army Dragster for DSR. An opening run of 3.811 seconds at 325.77 mph placed her second overall, but a mechanical failure following the burnout prior to her second run prematurely ended her day.

“Talk about the most prime conditions and something handed to us on a silver platter, but unfortunately we weren’t able to eat off of it,” Pritchett said. “Having a clutch linkage issue during the best conditions was not what we wanted especially when we felt like we had something in there for our competition. I think what impresses me most about this team is that no matter what the issue is we overcome it as a team. Tomorrow is all about overcoming adversity. The silver lining is we made a run to start the day that can help us be better on Sunday. And we are in this for the win Sunday.”
Qualifying concludes Saturday with sessions at 12 noon and 3 p.m. EST. FS1 will air two hours of qualifying coverage at 11 p.m.  Elimination rounds are set for at 11 a.m. Sunday with FS1 providing three hours of delayed coverage beginning at 7 p.m.