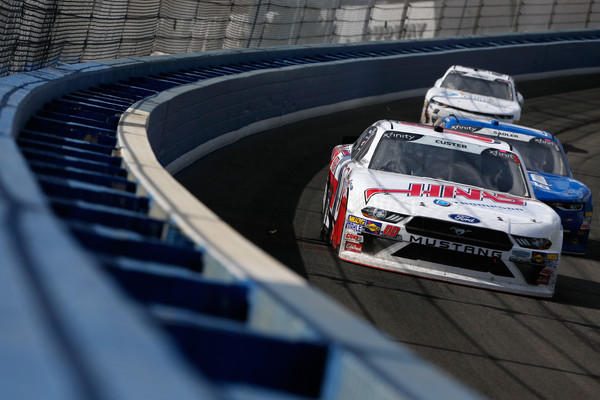 ● Custer piloted the Haas Automation Ford to the second position by lap two.

● During the stage, he noted visibility and handling issues due to sand on the windshield and tight-handling conditions.

● After a lap-33 caution, the stage concluded under caution. He pitted for four tires, fuel and chassis adjustments.

● Custer fell to the sixth position during the restart, but battled back to third place on lap 48.

● On lap 69, the caution flag was raised due to a cut tire on the No. 42 car, ultimately ending Stage 2 under caution.

● He pitted for four tires, fuel and adjustments, and gained one position on pit road.

● Custer piloted his Haas Automation Ford Mustang in and around the top-five until a lap-96 caution.

● Custer climbed to as high as second and ran inside the top-10 before another caution on lap 139. He pitted for four tires and fuel.

● Custer restarted in the third position behind a car on older tires. As a result, he was caught in traffic and battled just outside of the top-five before the conclusion of the race.

● This marks Custer’s first top-10 at Auto Club and third top-10 of the season.

● This was Custer’s third straight top-10.

● Joey Logano won the Roseanne 300 to score his 29th career Xfinity Series victory, first of the season and third at Auto Club Speedway. His margin of victory over second-place Justin Allgaier was 1.429 seconds.

“We had good speed today out of our Haas Automation Ford Mustang, but we got caught up there on the final restart behind the 39 car who was on old tires. I don’t know if we had enough to compete with the 22 car, but we definitely had a top-three car. It was a good day for the team and I’m glad we were able to put on a good race for my hometown fans.”

The next event on the NASCAR Xfinity Series schedule is the My Bariatrics Solutions 300 on Saturday, March 17 at Texas Motor Speedway in Fort Worth. The race starts at 3 p.m. EDT with live coverage provided by FOX.