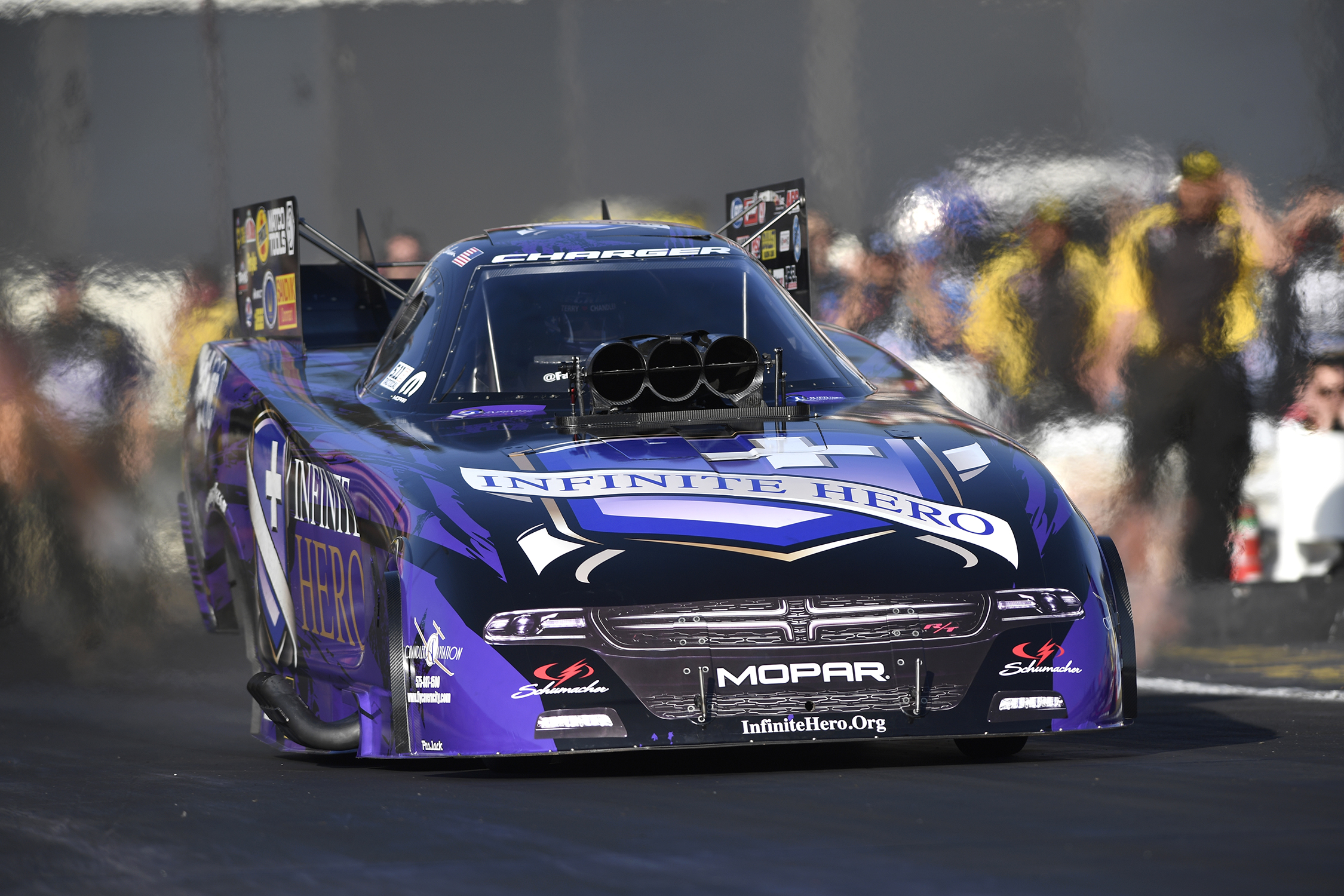 Jack Beckman collected the third No. 1 spot in three events for a Mopar Dodge//SRT driver this season, claiming the pole in his Mopar-powered Infinite Hero Dodge Charger R/T Funny Car before a sellout crowd at the 49th annual NHRA Gatornationals in Gainesville, Florida.

Beckman was on fire on Friday’s first day of qualifying, earning six bonus points and going low in both rounds with a pass of 3.958 seconds at 325.61 mph and a Q2 run of 3.911/332.18, which ultimately earned him the pole.The 2012 Funny Car World Champion added two respectable runs during the third and fourth qualifying rounds on Saturday to earn an extra bonus point.

Tony Schumacher led the way with Mopar power in the Top Fuel ranks, qualifying No. 4 thanks to a 3.785-second mark in his very first qualifying attempt. The same was true for Papa John’s/Mopar Dodge Top Fuel driver Leah Pritchett, who recorded a 3.811 right out of the gate in Q1 to grab the No. 6 position.

Pritchett will have an opportunity to capture two Wally trophies on Sunday at Gainesville Raceway after driving her Mopar Dodge Challenger Drag Pak into the second day of Factory Stock Showdown elimination rounds. In qualifying, Pritchett locked down the No. 7 spot with a best run of 8.109/168.22 in the second session on Friday, in addition to a Q1 run on Friday of 8.194/168.16 and a final attempt of 8.257/165.40 on Saturday.

She lined up her 354 supercharged Mopar Dodge Drag Pak against Daniel Condon in round one of Factory Stock. Pritchett left first with a .051 reaction time and never trailed, posting a 8.183/166.50 mark to the Camaro driver’s losing 8.204/165.52 effort. The DSR star will square off with Randy Taylor in the Factory Stock quarterfinals on Sunday.

Mopar Dodge Challenger Drag Pak Factory Stock Showdown racer Geoff Turk made history last weekend at the NMCA Bradenton event, becoming the first driver to break into the seven-second range in a Factory Stock car. Turk was quick at Gainesville, qualifying No. 5 with a 8.099-second elapsed time, but was unable to make the call in eliminations due to mechanical issues.

Pro Stock World Champion and longtime Mopar Dodge driver Allen Johnson will look to rebound at the next event after failing to qualify in his Factory Stock debut. Johnson’s best run was a 10.948/144.92, with a transmission issue scuttling his final attempt to the crack the competitive Factory Stock field.

“I love the fact that we did everything pretty darn good for four runs over the course of the two days here. I think it gives us a leg up going into tomorrow. We’ll have lane choice and we’ll get to pick when we’re going to run. We could make a poor decision, but I like that it’s our decision to make.

“I think by and large, you make your own luck. The team services the car perfectly, the crew chiefs put their heads together, go over data from past runs with similar conditions and make an educated tune-up there, and then you try and outdrive the person in the other lane. You race the race track. We have to do everything a little bit better than they do, but in our lane.”

“Gainesville, I mean, I just can’t get it to show me any love. It’s one of those places that no matter how great your combo is, this place steps on my toes all the time. We’re trying to work through it. We’ve got a good car. Obviously, Dickie (Venables, Hagan’s crew chief) has the skills and the know-how to navigate a hot racetrack. We just have to get it dialed in tomorrow.

“(Tim) Wilkerson (Hagan’s first round opponent) has had some issues, having to bring out a new car. And I wanted to say my respects to him on his dad passing away this weekend, obviously he’s got that on his mind, and we’ll be thinking about him.

“We’ve been going wide open. I’ve got to say, there’s so much on the line: the world championship, charity for our veterans and of course in Factory Stock, with bolt-on parts that you can put on your Mopar Dodge//SRT Drag Pak.

“I’m wide open all the time, but thanks for all the patience from DSR and all the fans, it means a lot. I’ve got the opportunity of a lifetime, and I’m trying to win it all.”

“It’s a new six-disc for us so we’re learning but [Rahn Tobler, Capps’s crew chief] was very happy. Friday night when we got done, he said we’re going to use tomorrow for Sunday. It’s going to be the same conditions. It’s so nice to see Tobler with a smile on his face. This is a tricky track and on Sunday, you’re going to have to really earn it.”

“We’re struggling with the changes. The six-disc clutch is still new to us. This is the first hot track conditions we’ve seen with it so we’re making ground. We made a nice run in the best conditions of the weekend so tomorrow will be more like we’ve seen today. So we have to learn from what we did during these two runs and put that together to make a nice solid day.”

“I love this race. It’s top three for me without a doubt. We just do so well here and that gives us a ton of confidence. The place was sold out today and fans jammed in here to see us do battle. There’s just something about racing here. We’ve won this race more than anyone else (in Top Fuel) and I’m excited to have another chance Sunday.”

Fans can view daily updates and get access to an online racing HQ, news, events, galleries, available downloads and merchandise. For information on Mopar on and off the track, check out the Mopar brand’s official blog, http://blog.mopar.com.