COURTNEY FORCE LOOKING TO ADD TO FAMILY LEGACY AT GATORNATIONALS 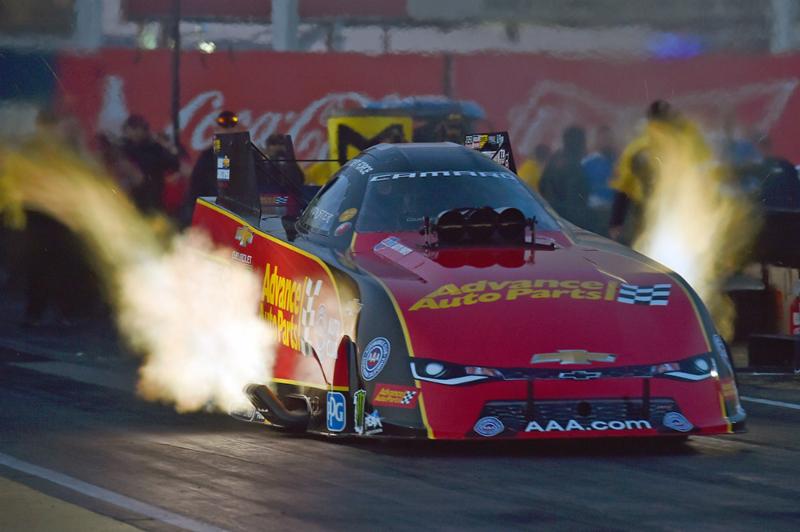 Courtney Force makes history every time she steps into the winner’s circle as the winningest female Funny Car driver in NHRA history. At the most recent NHRA Arizona Nationals the nine-time winner added to her legacy by racing to victory after watching her legendary father John Force crash and get transported to a local hospital. That kind of determination and focus has the youngest Force daughter ready to get to the 49th annual Amalie Oil NHRA Gatornationals at Gainesville Raceway.
“That win in Phoenix was definitely a great way to start off our season for our Advance Auto Parts team,” said Courtney Force. “It feels good knowing that we have a pretty good race car. (Crew chiefs) Dan Hood and Brian Corradi have been doing a great job. I am excited to get to Florida. This is a track where I have qualified well but have yet to get a win at the Gatornationals. All of my teammates have won at this track so I am really hoping we can get it done this weekend.”
Force is trying to become just the fifth woman in history and the first in Funny Car to win a professional title at the Gatornationals. She is also looking to join most of her family as a Gatornationals winner. Her father won the event for the eighth time last year, brother-in-law Robert Hight has three Gatornationals Wallys and her two older sisters, Ashley and Brittany, have wins in Top Alcohol Dragster and Top Fuel, respectively.
Although she has neither qualified No. 1 nor reached the final round at the Gatornationals, new co-crew chief Brian Corradi won in 2013 with driver Antron Brown in Top Fuel. The addition of Corradi to the Advance Auto Parts Funny Car team working beside crew chief Dan Hood has paid performance dividends throughout 2018.
“From testing to Pomona and then to Phoenix I think it has helped that we have been running good numbers,” added Force. “The runs we made at testing when we came back to Phoenix for the national event helped. I think we have a really great combination with the entire team. I thought it would take Brian more time to adjust coming from a Top Fuel dragster to a Funny car but he and Danny have been doing really well.”
On Thursday night Force will be visiting the Advance Auto Parts at 1035 E. University Avenue in Gainesville from 6:00-7:30 p.m. to meet fans and talk racing. Throughout the season Force has been attending pre-race meet and greets at Advance Auto Parts and the experience has strengthened her passion for the sport.
“Getting to spend time with the fans at Advance Auto Parts stores has been awesome,” said Force. “The fans are super excited to talk about my Funny Car team as well as all the JFR teams, plus they love the NHRA. We get to spend time with the fans at the races between rounds but it definitely gets busy. This is an opportunity away from the craziness of the race track to really be able to spend time with the fans, sign autographs, take pictures and get excited for the upcoming race. I’m so thankful that Advance Auto Parts provides this special opportunity to really give our fans an extra chance to meet me before the race weekend begins.”
Finally, Force will be wrapping up almost two weeks in Florida with the Gatornationals race. Last weekend she was in St. Petersburg cheering for her husband IndyCar driver Graham Rahal as he raced to a runner-up finish. Rahal will join Force on Sunday at the track and she will also have a number of long time family friends in attendance.
“We have a lot of close friends who are like family that are from Florida and this race has always been a great track. The atmosphere and the fans that come out is pretty incredible. It makes it a really fun weekend,” concluded Force.
Qualifying at the NHRA Gatornationals starts Friday with sessions at 2 and 5:45 p.m. and continues Saturday at 12:30 and 3:30 p.m. Eliminations will begin at 11 a.m.
JFR PR/Photo Gary Nastase