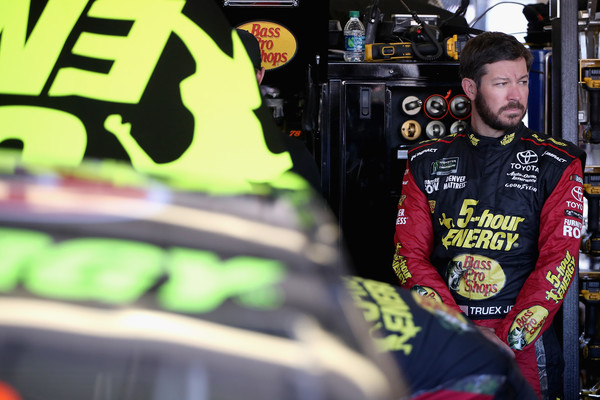 Martin Truex Jr. has a strong opinion of what not to do about the rough track surface at the 2-mile Auto Club Speedway, site of Sunday’s Auto Club 400 in Fontana, Calif.
“Fontana is such an awesome racetrack and to repave it would be a huge mistake,” Truex said. “I have a preference for worn-out track surfaces. The repave at Michigan (another 2-mile track) took a long time to come around. Repaves, in my opinion, don’t work out that well.”
Before the three-race Western Swing started the Furniture Row Racing driver felt his best shot of winning was at Auto Club Speedway. He said top-five finishes at Las Vegas and Phoenix would work, but felt it would be at the Southern California track as his best chance of returning to Victory Lane.
So far he is right on with his Western Swing goal. He finished fourth in Las Vegas and fifth in Phoenix.
Will Truex go three-for-three on his goal by bringing home a California-style win in his No. 78 Bass Pro Shops/5-hour ENERGY Toyota Camry?
“I feel Fontana has been a good track for us over the years but we just haven’t capitalized on our performance there,” Truex noted. “We’re right there. It’s like when you’re out fishing and you catch a bunch of fish and you feel like you’re throwing the right lure, but maybe it’s just not the right color – we need to get it dialed in. We’re so close.”
With the forecast of cooler temperatures in Fontana this weekend, Truex feels that could even the playing field.
“The biggest thing when it’s cooler at Fontana it makes it a little bit easier for everybody to get their cars dialed in,” Truex said. “When it’s sunny and warm there the track gets so slippery, making the car difficult to drive and handle. If it’s cooler the field will be closer and make it harder to pass. Just a more difficult weekend in general.”
Truex enters this weekend’s Cup race tied for second in the driver standings, thanks to three straight top-five finishes. After being wrecked late in the Daytona 500 with an 18th-place result he rebounded with finishes of fifth in Atlanta, fourth in Las Vegas and fifth in Phoenix.
“No question we’re off to a solid start and just need a few more right tweaks to get to where we want to be,” explained Truex, the reigning NASCAR Cup Series champion.
Truex scored his only top five at Fontana with a fourth-place finish in last year’s race. His Fontana totals include 17 starts, one top five, five top 10s and 108 laps led. His average start is 13.5 and average finish is 19.2.
FRR PR/Photo Christian Petersen/Getty Images