Ford and Harvick Going For Four Straight This Weekend 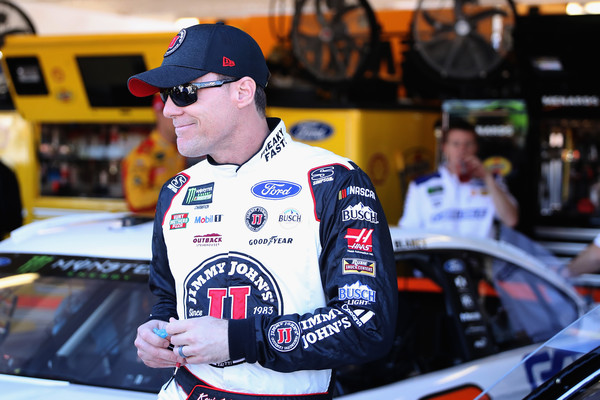 7 IN THE TOP ELEVEN

Harvick’s victory strengthened his lead in the MENCS point standings as he sits 12 points ahead of the pack.  Overall, Ford drivers dominate the way with six in the top 10 and seven in the Top 11.  Ford drivers following Harvick include Joey Logano (4th), Ryan Blaney (5th), Brad Keselowski (7th), Clint Bowyer (9th), Aric Almirola (10th) and Kurt Busch (11th).  In addition, Ford continues to lead the manufacturer standings by eight points.

With Team Penske’s Brad Keselowski winning the NASCAR XFINITY Series race on Saturday and SHR’s Harvick taking the MENCS event one day later, it completed a Ford Performance weekend sweep at ISM Raceway.  That marks the second time in four weekends Ford has won both events after Harvick captured each race in Atlanta.

·         The only Ford driver with more than one Auto Club win is Matt Kenseth with three.

FORD IN THE NASCAR XFINITY SERIES AT AUTO CLUB

Ford got its first checkered flag at Auto Club Speedway in the track’s second year of existence when Mark Martin won the Monster Energy NASCAR Cup Series race on May 3, 1998.  Martin was in a class by himself that afternoon as he led 165 of the 200 laps en route to what was his 25th career victory.  In all, six Fords finished in the top-10 as Jeremy Mayfield finished second, Chad Little, Geoffrey Bodine, and Johnny Benson were sixth, seventh and eighth, respectively, while Jeff Burton ended up 10th.

BIFFLE RALLIES FROM ONE LAP DOWN

Despite falling a lap down, Greg Biffle found a way to not only get back to the front, but hold off a charging Jimmie Johnson to win the Auto Club 500 on Feb. 27, 2005.  Biffle led a parade of four Roush Fords in the Top 10 as Kurt Busch finished third, Carl Edwards fifth and Mark Martin seventh.  Biffle put himself in position to win when he stayed out on what proved to be the final caution of the day.  Busch had the lead on the restart with 29 laps to go, but Biffle was able to pass him six circuits later.  Even though he scraped the wall on a couple of occasions down the stretch, he managed to coax an ill-handling Taurus to his fourth series win.

Matt Kenseth followed up his first Daytona 500 victory by taking the checkered flag in the Auto Club 500 one week later on Feb. 22, 2009.  Kenseth became the fifth driver in Monster Energy NASCAR Cup Series history to follow a Daytona 500 victory with another win the following week.  On this day, he and Jeff Gordon had the two best cars on the track, but Kenseth’s advantage came on pit road, where his crew continually got him out first.  Kenseth led a race-high 84 laps as he went on to post his third all-time win at the two-mile track.

KESELOWSKI LEADS ONLY LAP THAT COUNTS

Thanks to a pair of cautions that resulted in two green-white-checker restarts, and a gamble by crew chief Paul Wolfe in the closing laps, Brad Keselowski came out of nowhere to win the Auto Club 400 in 2015.  The victory was made all the more surprising considering the only circuit Keselowski led all day was the last one.  That’s because the Stewart-Haas duo of Kurt Busch and Kevin Harvick dominated much of the race.  Busch looked ticketed for victory as he led the field coming to the white flag, but caution for debris came out before he crossed the start-finish line, resulting in a green-white-checker finish and a flurry of action on pit road.  Even though only two laps remained, all but three drivers – Jeff Gordon, Tony Stewart and Greg Biffle – opted to come down pit road.  The decision for crew chiefs was whether to take two or four tires, and most of the leaders decided on two.  Wolfe, who has been known to gamble a time or two, saw that and felt the only way his team could win was if they did something different, so he ordered four.  Even though it put them back in 17th on the ensuing restart, the fresh tires enabled him to charge up to sixth on the restart.  His chances at victory improved even more when the rear bumper of Kyle Larson’s Chevrolet flew off and brought out another caution before Busch could come back around.  Armed with the freshest tires among the lead cars, Keselowski took advantage on the second green-white-checker and made every right move to get past Harvick and Busch to win for the 17th time in his career.