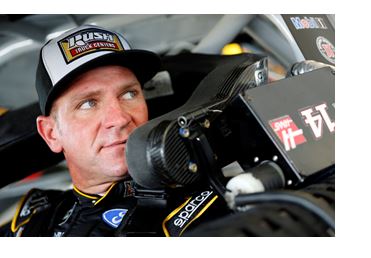 North Carolina (March 13, 2018) – The Monster Energy NASCAR Cup Series tour offers fans the thrills of nose-to-tail drafting packs at Daytona and Talladega, the beating and banging at short tracks like Bristol and Martinsville and the high speeds of the mile-and-a-half tracks like Charlotte and Atlanta.

Clint Bowyer believes you have to add Auto Club Speedway in Fontana, California to that list for one simple reason: restarts.

For proof of the Stewart-Haas Racing (SHR) driver’s claim, one only needs to tune in to FOX at 3:30 p.m. EDT Sunday to watch the fifth race of the 2018 Cup Series season – the Auto Club 400. Bowyer says the wild restarts at the track east of Los Angeles are as spectacular from behind the steering wheel as they are in the grandstands and on television.

“The restarts at California are awesome,” said Bowyer, who added that drivers can choose from among five different racing lines on the 2-mile, D-shaped oval. “I think it’s great for the fans. You see us get bunched up for the restart and go off into turn one. All hell breaks loose and it looks like we are 25 cars wide. When that spotter says, ‘Outside,’ you better be sure there is just one car outside of you and not two or three.”

Bowyer knows what he’s talking about when he cites the frenetic racing at Fontana. Last year, he started overtime in seventh place and raced to third in the two laps of competition before the checkered flag waved. It capped a day that saw Bowyer earn points in all three stages of the race, and it marked his third top-three finish at Fontana.

Bowyer said he loves the challenge the track presents to the drivers and teams.

“The speeds are always very fast at California and, on top of that, the grip level goes away drastically fast,” Bowyer said. “For me, I love that. I love how the track slicks off and you have to focus on the balance. You can’t have that front end turning too good and have that rear end pulling out from under you, and vice versa.” The width of the track also poses some challenges for both the driver and his spotter.

“You really have to focus in on the communication with your spotter,” he said. “When he says they are running the top, you have to think about what he really means. With a track as wide as California, you have to know where the other cars are at all times.”

Bowyer arrives at the end of the Cup Series’ three-race West Coast swing after finishing sixth at ISM Raceway near Phoenix last weekend. That finish, coupled with a 15th at Daytona, third at Atlanta and 18th at Las Vegas, vaulted Bowyer to ninth place in the standings.

Most importantly, the SHR organization is on a roll.

All four SHR drivers finished in the top-10 Sunday at Phoenix, and Kevin Harvick won his third consecutive race and the 46th overall win for SHR. It was the organization’s 42nd points-paying Cup Series win and SHR’s sixth Cup Series victory with Ford. Harvick leads the points with Bowyer, Aric Almirola and Kurt Busch ninth, 10th and 11th in points.

Bowyer would like to see the success continue this weekend at Fontana, where SHR owns two victories scored by Tony Stewart in October 2010 and March 2012.

“I’d say that was pretty much a statement last week,” Bowyer said. “Maybe we can do it again this weekend in Fontana.”

What is it like to drive at Auto Club Speedway?

“I think I’ve been going there 12, 13 years now. I remember single file around there. Couldn’t really pass. Ring around the bottom. Now, I mean, all hell breaks loose on those restarts. You’re trying to protect the bottom. They’re calling you outside. You don’t know if you’re three-wide, four-wide, 12-wide. It’s all because of a really wide, cool racetrack. A fast racetrack and a lot of grooves. Five different grooves to race on all day long. It’s just a lot of fun to be out there. Very challenging track. Trying to balance those front tires, the rear tires, not push ’em off. You can overdrive your car. I did one run. Thing fell away. You know, you learn from your mistakes and go on.”

What is the secret to success at Auto Club Speedway?