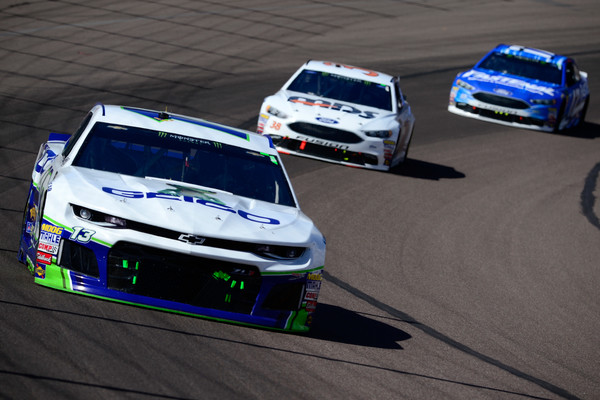 A week ago, Ty Dillon escaped the Monster Energy NASCAR Cup Series race in Las Vegas with a 24th place finish and eagerly anticipated his arrival at ISM Raceway, located just outside of Phoenix, AZ. Germain Racing’s previous visit to the one-mile oval in November was met with success, as the group was able to score an 11th place finish in the #13 GEICO Military car.
Opening day on Friday would nearly mirror the results from his last visit to Phoenix. Dillon ended up 30th in the weekend’s opening practice session and later improved a spot from his November visit when he landed his No. 13 GEICO Camaro ZL1 28th on the TicketGuardian 500 starting grid.
On Sunday, blue skies, sunshine and packed grandstands watched over the Cup Series field when the green flag turned the field loose for 312-laps of close-quarters racing action. Dillon and his No. 13 GEICO Camaro ZL1 took off from the 28th position. As he approached the green flag during the final parade lap, Dillon communicated to the team, “Let’s be patient, we’ll reel them in on the long runs.” While the young gun was well intentioned, his fast GEICO machine betrayed his thoughts when he immediately charged forward, gathering five positions in the opening four laps before breaking into the top-20 a short time later. Dillon’s enthusiasm was evident over the team’s radio frequency,

“We have a really good car today!”

As the race wore on, the GEICO Camaro ZL1 began to tighten up as track conditions changed and, as stage one was nearing its completion, Dillon brushed the wall, resulting in a tire rub. The Germain Racing pit crew worked to remedy the issue, which would take a couple of stops in order to help mitigate any significant loss in positions. Crew Chief Matt Borland sharpened his pencil and was able to use strategy, along with the hustle of his driver, to recapture lost real estate. When stage two came to a close at lap 150, Dillon was scored in the fifth position and recorded six stage points, his first of the season.
With the tire rub eliminated and a strong GEICO Camaro ZL1 underneath him, Dillon continued to pedal his way around the one-mile oval in hot pursuit of a solid finish. Unfortunately, a loose wheel would derail his efforts with just 12-laps remaining in the 312-lap event. At once staring a decent finish in the face, Dillon would be forced to make an unscheduled green flag visit to pit road in the closing laps. As a result, he would ultimately be rendered three laps down to the field when the checkered flag brought things to a halt just a few laps later, leaving the youngster with a heartbreaking 30th place finish.
“Our GEICO Camaro ZL1 fired off great to start the race because we were tight, and that worked well for us on the green racetrack. Once the track started to rubber up and change, we were too tight and I tagged the wall there in the middle of the first stage and had body damage to the right rear of the car that we needed to fix,” Dillon said. “We worked on the damage on every stop after that until the fender was clear, and my team kept adjusting the car to keep my balance in a good spot throughout the race. We had some good moments today in being able to muscle around the cars in front of us and using strategy at the end of Stage 2 to pick up our first stage points of the season. We know that we need to be in a position each week to get more of those points because they are so critical, and we’re going to get there. I have no doubt about this team’s ability and the fight that we’ll put up to keep growing and improving.”
Germain Racing will now make their way to Fontana, CA, for race number five of the NASCAR Cup Series season, and the third and final leg of March’s west coast tour.
Ty Dillon and the No. 13 Twisted Tea Camaro ZL1 will hit the track in Fontana for the weekend’s opening practice session on Friday, March 16th, at 2:35 PM (ET). Qualifying will follow at 7:15 PM (ET).
The 400-mile Monster Energy NASCAR Cup Series race is on Sunday, March 18th, and it will be televised live on FOX beginning at 3:30 PM (ET). The Motor Racing Network (MRN) will carry the live radio broadcast, along with SiriusXM NASCAR Radio, channel 90.
PMI PR/Photo Robert Laberge/Getty Images