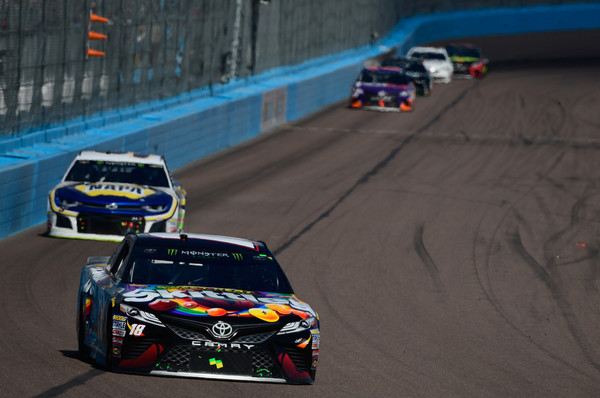 ● Kyle Busch started seventh but moved up to fifth by lap 24, reporting to crew chief Adam Stevens that his car was tight in the center of the corner.

● Busch made quick work of JGR teammate Denny Hamlin to move up to second and then set his sights on leader Kyle Larson, moving by him on lap 58 to take the lead.

● The Las Vegas native held the lead for the remainder of the stage and brought home his first stage win of 2018, adding one playoff point and 10 additional regular season points to his tally thus far this season.

● Busch pitted on lap 79, and the Skittles Sweet Heat crew kept him out front off of pit road.

● Busch held the lead until a caution waved with four laps to go in Stage 2.

● Stevens, keeping the big picture and the race win in mind, pitted with three laps to go in the stage while seven cars on the lead lap stayed out.

● Busch restarted eighth with one lap to go in Stage 2 and moved up to fourth at the end of the lap.

● With the three cars ahead of him pitting during the stage break, it cycled Busch back to the lead when the green flag waved on lap 156.

● The Skittles Sweet Heat driver maintained the top spot until lap 179, when Kevin Harvick moved past Busch for the lead.

● Busch pitted under caution on lap 194, and Stevens made changes to address handling that was loose with the back but too tight with the front.

● Starting with the lap-198 restart, Busch settled into the third position and radioed to Stevens that he couldn’t wrap the corner like he could earlier in the race when he was leading.

● However, over the long run, Busch was able to save his tires better than leaders Hamlin and Harvick, as he was able to pass Harvick on lap 240 and take the lead past Hamlin on lap 243.

● While leading, Busch came to pit road for the final stop on lap 256, but an issue with the car falling off the jack slowed the stop down, and Busch cycled out to third once green-flag pit stops were over.

● The Skittles Sweet Heat driver passed second-place Chase Elliott but couldn’t catch Harvick over the last 56-lap run of the race, having to settle for the runner-up finish to Harvick for the second week in a row.

● This is Busch’s second top-five of the season and his eighth top-five finish in 26 career starts at Phoenix.

● Busch recorded his second runner-up finish in a row this season and his third consecutive top-10 finish.

“Our guys did a great job with our Skittles Sweet Heat Camry. We didn’t have a second-place car yesterday, so Adam (Stevens, crew chief) and the guys did a phenomenal job overnight of making some adjustments to this thing and getting it where we needed it in order to have a fast racecar to keep up with the 4 (Kevin Harvick). Through much of the race today I actually managed to out-race the 4 and beat him. There with the 11 (Denny Hamlin), when the 11 was holding up the 4, I had an opportunity to get to his outside and make a three-way battle for the lead and take the 4 before the 4 got clear of traffic. Once the 4 gets clear of traffic and gets in his own air, it’s hard to beat that guy. I was trying to count on that happening again with the 9 (Chase Elliott), hoping that the 9 would hold him up just long enough for me to get there. I was rushing to get there, and I feel like I burned my stuff up by doing that, but once the 4 got out front, he was in his own air and just picking off traffic. There was nothing I could do with that, he was too fast to beat. I felt like if we were in his shoes and it was the other way around, we probably would have been the same way.”

Next Up: The next event on the Monster Energy NASCAR Cup Series schedule is the Auto Club 400 on Sunday, March 18 at Auto Club Speedway in Fontana, California. The race starts at 3:30 p.m. EDT with live coverage provided by FOX.