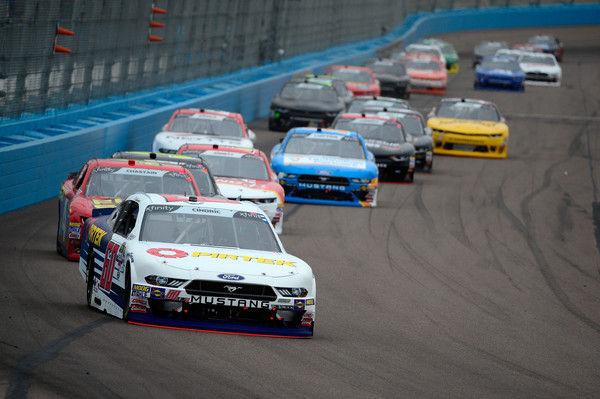 “We accomplished one of our main goals which was to bring home the Pirtek Ford in one piece,” Cindric said afterwards. “Our Pirtek Ford started out really good but as the race progressed we got really tight. I’m not sure if it was because the rain washed off the rubber or what caused the tightness. We are learning and will keep getting better throughout the year.”

After barely missing the final round of qualifying on Saturday afternoon, the rookie started the 200-lap race in the 13th position and picked up two additional spots by the time the first caution flag was displayed on lap 26. During the caution, Cindric reported that the balance of his Pirtek Ford was really good. With a 12-lap shootout to the end of stage one, the Roush Fenway Racing driver took the green-checkered flag in the 13th position.

Mother Nature moved in at the end of stage one bringing out the red flag causing an hour delay. Once the track drying was complete, Cindric brought his Ford to pit-road for four tires, fuel and an air pressure adjustment. With differing pit strategies, the Mooresville, NC native lined up in the 19th position for stage two.

After patiently working his way up through the field, Cindric was scored in the 15th position when the caution was displayed just eight laps shy of the end of stage two. With a majority of the leaders bringing their cars to pit-road, crew chief Mike Kelley called Cindric to pit-road for four tires and fuel.

With only two laps remaining in the stage, the red flag was once again displayed for weather. After the brief delay, the red flag was lifted causing a one-lap shootout to the green-checkered flag. With the uncertainty of what would happen on the restart, Cindric finished 19th after being warned to be careful in case a wreck happened near the front of the field.

With the final stage going caution free and differing pit strategies, Cindric took the checkered flag in the 16thposition.

Next up for Cindric and the No. 60 team is Auto Club Speedway on Saturday, March 15. Race coverage begins at 5p.m. (EST) on FS1. Coverage can also be heard on MRN and NASCAR SIRIUS/XM radio channel 90.