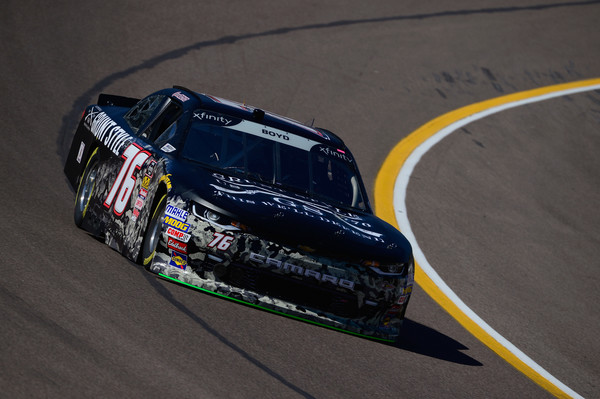 ISM Raceway, formerly known as Phoenix International Raceway, played host to the NASCAR Xfinity Series for the second race of NASCAR’s West Coast swing. After a disappointing result in Las Vegas, Spencer Boyd and the Grunt Style, SS Greenlight team were ready to turn their luck around.

Boyd would start from the 34th position for the 200 lap event in the desert. Boyd wasted no time from the start as he passed about six cars in the opening laps. Caution came out on lap 27 for the 52 car. Crew Chief Jason Miller brought Boyd down the pits for four tires, fuel, and adjustments on lap 30. With about ten to go until the conclusion of stage one, there were multiple reports of rain in the area. Justin Allgaier won the stage with Boyd finishing 30th.

The skies opened up and NASCAR was forced to display the red flag for rain. After over an hour and a half of delay, drivers were called back to their cars. In the second stage, Boyd battled tire chatter throughout the run. With about seven laps remaining in the stage, caution was again displayed for the 15 of Matt Mills. The rain came again, forcing a second rain delay. After about 30 minutes, the race was resumed. Kyle Busch won the second stage with Boyd finishing in the 31st position.

Jason Miller continued adjusting the car to Boyd’s liking and on lap 103, Boyd ran his fastest lap of the race. Boyd continued to battle tire chatter throughout the final stage. With 55 laps remaining Miller played a little strategy, as he called for Boyd to come to the pits for tires, fuel, and adjustments early, also known as “short pitting”. Boyd was able to pass a few competitors with Miller’s strategy move and ended up finishing in the 30th position. Brad Keselowski won the race.

After the race Boyd reflected, “It felt like that race lasted for days with all those rain delays. We battled tire chatter throughout the whole weekend, but my guys made some awesome gains throughout the race. After the mechanical failure last week, we really just wanted to put a solid run together and I think we did that today. Of course we’d like to finish a little higher, but we’re still learning so much together and that’s what it’s all about right now.”

Boyd arrived back in Concord early this morning. He will spend the week catching up on rest before heading back out West to California for the final stop of the West Coast swing. Boyd remains 31st in the point standings. Race coverage from California begins Saturday at 5:00 ET.