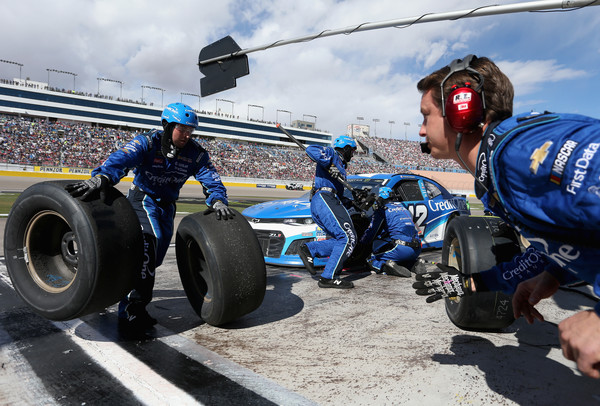 THE MODERATOR:  Now we are joined by the driver of the No. 42 Credit One Bank Chevrolet, third‑place finisher Kyle Larson.  Kyle, this is your second consecutive top‑three finish at Las Vegas, another good one following up a win yesterday.  Maybe talk about the race out there, please.

KYLE LARSON:  Yeah, it was a good race for us, finished third, I think, in both stages and third in the race.  You know, solid day.  Had to fight pretty hard there a few times throughout the race just from losing a lot of track position on the pit stops and stuff.  I don’t honestly know what was going on yet with the pit stops, but we’ll watch some tape, and if it was something I was doing wrong, we’ll fix that up.

But yeah, it was a good day.  Our Credit One Bank Chevy was fast.  Nowhere near Harvick’s level, but I felt like for most of the day we were second or third best, so happy about that, and yeah, you know, with coming back later in the year for a playoff race, it’s nice to know that you’ve been fast here now the last two years and hopefully can continue that.

Q.  When a guy is as much faster as Kevin was today, do you reach a point during the race when you’re sort of resigned to, hey, I’m probably racing for second unless he blows up or something happens?  Does it get that bad when a guy is this fast?

KYLE LARSON:  No, I don’t think ever in a NASCAR race you can think that because it seems like so often a caution will come out with less than 10 to go, and you have to come down pit road, and that can change the race.  I wanted to keep myself as high up as I could to just give myself a shot on pit road or something like that or for a late‑race restart.  You never know what can happen at any point throughout a Cup race, but especially there at the end.  Everybody gets so aggressive.

Yeah, I mean, if you know it’s going to go green the whole time, then yeah, you’re like, okay, I’m racing for second or third right here.  But yeah, like I said, you can never count yourself out in a Cup race.

KYLE LARSON:  I don’t know, I mean, yeah.  For whatever reason it definitely seems like the other ‑‑ I wouldn’t even say the other Chevy teams because RCR I feel like is running about as good as they did at this point last year, but Hendrick for some reason, they seem to be off.  It was kind of odd to lap three out of the four cars there in the first little part of the race.  But our team, I guess ‑‑ I don’t know, whatever we do different helps us out.  All we really get from Hendrick is their engines, so they could be doing stuff way different than us.

If we are better, it’s barely anything.  But it’s good that we’re not any worse than we were last year.

KYLE LARSON:  Well, I just think there’s better drivers with more experience in the Cup Series.  In all of our cars maybe stuck to the track a little bit better.  But I just think when you have a field full of Cup drivers who have so much experience, they kind of know where they need to be each lap of the race, really, and really good at feedback.  So, everybody is always getting their cars better throughout the race.

So, I think that’s why sometimes you can see less passing.  If you compare trucks to Xfinity, I mean, there’s better racing in trucks than Xfinity because there’s ‑‑ well, that, and there’s just a lot of less experienced guys that are wild.

But it just ‑‑ yeah, I mean, I think the more you go up the ladder, you have more experienced guys that know what to do with their car and where to position themselves.